Jedward get a makeover and their fans are absolutely disgusted

John and Edward, aka Jedward, are known for their (very) spiky, larger than life, hairstyles so it's strange to see them sport such different looks.

John's hair is slicked back while Edward's locks are enviably voluminous and curly with both of them dressed in monochrome ensembles.

So... they dressed Jedward as priests...#100percenthotter 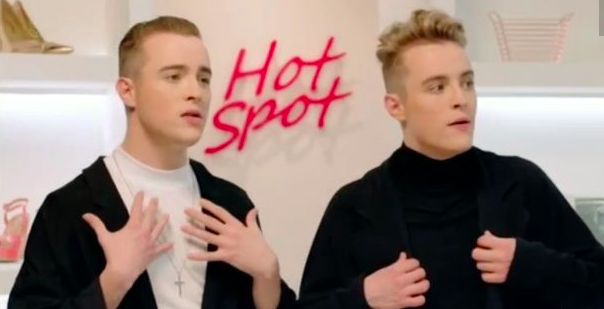 They were hoping for a more grown-up look but Twitter users compared them to 'priests' instead and you know what, this comparison might actually stick.

Omg I have to say that the new look didn't suit you at all! ? It was like priests on a night out! Just stick to your own style you do so much better job yourselves! ??

Another comparison the twins, aged 26, received was that they look like Harry Potter's Draco Malfoy.

Although we're used to them looking identical, this makeover set them apart and fans weren't sure how to feel about the surprising transformation.

They have a huge fan following and many people shared their thoughts on their priest-inspired outfits on Twitter with the main reaction being that their old look was much more preferable.

Nice for a one off look, but I can see why John and Edward prefer to style themselves! #100percenthotter #Celebrity100PercentHotter

Watching #100PercentHotter with Jedward hope they dont change them too much because Jedward are awesome!!!?

popular
Body found in search for missing five-year-old boy in Co. Mayo
Temperatures to reach 27 degrees today, but the good weather won't last for long
#Covid-19: Dublin Zoo reopens today with new safety measures in place
From Miami to Mallow: The Irish Instagram star who's renovating an old post office during lockdown
PERSONALITY QUIZ: Which Normal People character are you?
5 ways you can help the George Floyd protesters and Black Lives Matter movement
There's a special offer that lets you stay at TWO Irish castles the summer, and it's the five-star holiday of our dreams
You may also like
1 month ago
Wondering how the Gavin & Stacey crew might cope in a lockdown? Twitter has you sorted
3 months ago
Jameela Jamil has come out as queer on Twitter, and serious respect
5 months ago
Woman shares travel adaptor hack that legit has shaken us to the core
5 months ago
These were the most popular tweets in Ireland in 2019
5 months ago
The Queen gives out to Princess Anne for snubbing Donald Trump and we can't stop watching
5 months ago
Everyone on Twitter is howling at the new AirPod carrying straps
Next Page