Jennifer Lawrence reveals how itching her arse almost killed someone

Jennifer Lawrence is one of the most popular actresses around today, and at the tender age of 26 she's certainly established quite an amount of fame for her movies and acting skills.

While she's beautiful, stylish and funny, she's also extremely self-deprecating which makes her totally relatable to people like you and I.

She's hit headlines on numerous occasions for her blunders and awkward mistakes and she's opened up about another hilarious incident in true J-Law style. 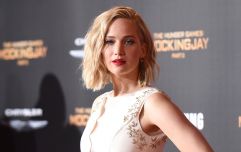 END_OF_DOCUMENT_TOKEN_TO_BE_REPLACED

While on The Graham Norton Show with actor Chris Pratt and chef Jamie Oliver, Jennifer shared a tale about working in Hawaii for one of the Hunger Games films.

Jennifer told of shooting in Hawaii and needing to itch her bum but rather than use her hand or a different instrument, decided to use a rock for her perusal... but didn't anticipate what would happen next.

"I was in a wetsuit for this whole shoot and oh my god they were so good for butt itching...

"One rock I was scratching on ended up coming lose and it was a giant boulder and rolled down the mountain and nearly killed the sound guy.

"All the Hawaiians were like “it’s the curse!” And I was like I’m the curse, I wedged it loose with ma ass"