Our hearts. They hurt.

Jennifer Lopez is preparing to marry Alex Rodriguez and plans to have someone very special on her arm when she walks up the aisle.

J.Lo has told Entertainment Tonight that her son Max will be giving her away on the big day. Awww.

Jennifer is mum to twins Max and Emme from her relationship with Marc Antony.

All the love backstage on the #itsmypartytour ♥️♥️??

The 11-year-olds seem pretty close with Alex, with Jen often sharing photos of them hanging out.

Jen, who has been married three times in the past, isn't in a hurry to tie the knot.

When asked about her wedding plans, she revealed that they hadn't set a date or chosen a location. 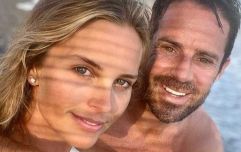 END_OF_DOCUMENT_TOKEN_TO_BE_REPLACED

Alex and Jennifer first began dating in February of 2017. He got down on one knee during a getaway in March of this year.

popular
14-year-old boy charged with murder of 12-year-old Ava White
The new restrictions likely to be introduced as NPHET meets with government
Toy Show's sign language interpreter Amanda Coogan hailed a "national treasure"
This year's Late Late Toy Show has broken Irish TV records
New Zealand politician cycles to the hospital one hour before giving birth
Selling Sunset's Christine Quinn slams 'fake pregnancy' rumours
You can now get an Aperol Spritz Christmas jumper – and we predict a sell-out
You may also like
1 week ago
Bride asks her guests to pay $150 to attend her wedding
1 week ago
Weddings and hotel bars will also have midnight closing
1 month ago
Meet the Dublin bridal shop donating their dresses to Barnardos every year
1 month ago
Groom kicks out wedding guests after they all wear white
1 month ago
Bride disinvites woman from wedding, still wants to wear her dress
1 month ago
Best man's hilarious comment picked in TikTok up as newlyweds have their first dance
Next Page