Jenny Greene has announced she is leaving 2FM

Jenny Greene has announced that she is leaving 2FM.

The radio presenter released a statement on Twitter, saying that it was with a "heavy heart" she was confirming her departure.

"It is with a heavy heart that I have decided to say farewell to 2FM. 12 years ago John Clarke gave me the opportunity of a lifetime, to host my own show on Friday night.

"Soon after, Ian Wilson took my under his wing and secured me a Saturday night show and he gave me the freedom to create my own brand and vision with The Electric Disco.

“When Dan Healy pitched the idea of working alongside Nicky Byrne in 2014, never in a million years did I imagine, that such a risky pairing would be so successful or that I could find a friend who supports me both on and off air. He really is my rock." 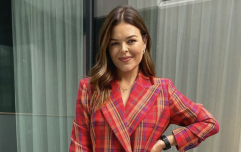 END_OF_DOCUMENT_TOKEN_TO_BE_REPLACED

She recalled how she had "so many amazing experiences from broadcasting at Oxegen, Electric Picnic, Sea Sessions and Longitude to actually performing at festivals and selling out arena's with the amazing RTÉ Concert Orchestra and Gemma Sugrue."

"Having started off in the evening time and progressing on to a very successful day time show, going back to the evenings on 2FM just doesn't feel like the right decision for me both professionally and personally.

"So I want to thank all the loyal listeners, who tuned in everyday on 2FM and those who helped me along the way in RTÉ: you know who you are.

"To quote the late, great Terry Wogan: 'there's never a right time to leave something you love, but there might be a wrong time if you hang on too long.'"

You can read her full statement here.

popular
Love Island's Danica said she felt "disrespected" in the villa
EastEnders star Samantha Womack reveals she has breast cancer
Dami explains why he was "angry" during the Love Island reunion
Love Island's Remi accuses Jacques and Luca of bullying
Actress Anne Heche in coma following car crash
Sleep expert reveals how to keep your bedroom cool this summer
Everything we know about Love Island USA's Irish premiere
You may also like
5 months ago
Eoghan McDermott responds to allegations made against him
5 months ago
Louise McSharry says "no one spoke to me at all" ahead of 2FM exit
6 months ago
Louise McSharry says she felt like "trash" after departure from 2FM
8 months ago
Irish woman gives birth to baby in taxi while on holidays in Lanzarote
9 months ago
"I felt like I couldn't speak": Lottie Ryan opens up on spiking experience
9 months ago
Tributes paid to legendary 2FM DJ Simon Young, who has passed away
Next Page