Jesy Nelson and Chris Hughes have reportedly broken up

Jesy Nelson and Chris Hughes have reportedly broken up after more than a year together.

The couple are said to have split "a couple of weeks ago" and are "still really good friends."

"Jesy and Chris split up a couple of weeks ago. It was all very amicable and they're still really good friends," a source told The Sun.

"Jesy rang Chris and led the conversation about their relationship and both agreed that it felt like it had run its course - they're both absolutely fine."

The pair had been separated in recent weeks, after the government advised the public to stay indoors during the coronavirus pandemic. 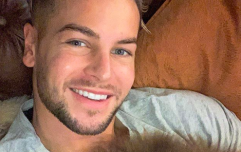 Chris Hughes apologies for 'altercation' with photographer outside NTAs

END_OF_DOCUMENT_TOKEN_TO_BE_REPLACED

Neither Chris or Jesy have commented on the reports yet.

However, Jesy recently admitted to the Sunday Telegraph [via The Sun] that they hadn't seen each other "for a while."

"Chris isn't with me right now because he is in isolation with his flatmate, so I haven't seen him for a while," she said, adding that her love life is "fine and dandy."

The couple were first romantically linked in January 2019 and - after a brief split the following month - things appeared to be going from strength to strength, even sparking engagement rumours late last year.

popular
This amazing hanging egg chair is coming into Aldi next week and go, go go (but safely)!
Lidl is launching a new hyaluronic skincare range and the serum is only €3.49
Patrick Dempsey Denies He Was Fired From Grey's Anatomy For Having An Affair With Intern
PSA: White Claw Hard Seltzer is launching in Ireland next month
Richard Corrigan offering €90,000 wedding package prize for one Irish frontline healthcare worker
Her Quarantine Quiz Week 9: Iconic Irish music videos
Thursday set to be the hottest day of the year, says Met Éireann
You may also like
3 months ago
Jesy Nelson tears up as she accepts NTA award for documentary, Odd One Out
6 months ago
Jesy Nelson sparks engagement rumours after sweet post about Chris Hughes
6 months ago
'She's so strong' Chris Hughes breaks down on This Morning discussing Jesy Nelson's journey
8 months ago
People are sharing their experiences of bullying in the wake of Jesy Nelson's documentary
8 months ago
Little Mix singer Jesy Nelson opens up about a suicide attempt after vicious trolling
10 months ago
Jesy Nelson just debuted an unreal new hairstyle on Instagram, and WOW
Next Page