As things heat up for the Irish Rugby squad, Joanna Cooper has flown to Japan to support her boyfriend.

Ahead of the quarter-final this Saturday when Ireland will take on the All Blacks, the 26-year-old model has landed in Fukuoka to spend a couple of days sightseeing with her boyfriend ahead of his next match.

Sharing a sweet snap, the pair posed together on a bridge before eating some ramen and visiting a cat cafe. 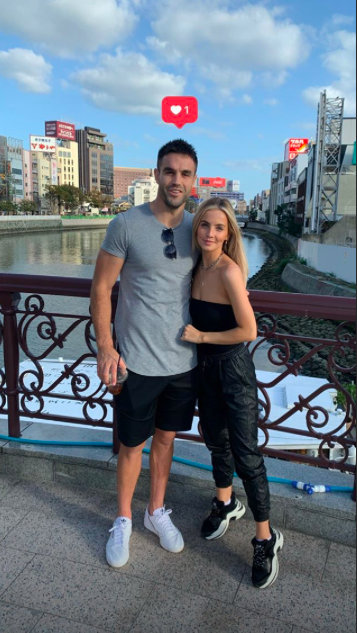 And Joanna isn't the only rugby girlfriend who has just made the trip overseas, Joey Carbery's partner, Robyn Flanagan also landed in Japan this weekend, sharing a photo alongside the rugby star in Fukuoka, the pair are also making the most of the week off.

Conor and Joanna first confirmed their relationship in March 2018. Sharing a photo on St Patrick's Day after Ireland's Grand Slam win in the Six Nations, the pair went public as they enjoyed the victory celebrations.

Ireland will take on New Zealand this weekend, Saturday 19 at 11:15 am (Irish time).


popular
Samantha Markle has spoken out about Meghan and Harry's decision to pull away from the royals
We are absolutely obsessed with this grey teddy coat, and it's just €29 in the Zara sale
Met Éireann has issued an ice and low temperature warning for 17 counties
The €23 New Look dress you're going to want to pick up before everyone else
Holly Willoughby wore a gorgeous €59 mini skirt from & Other Stories this morning
Kate Middleton is wearing a sold-out €16 Zara dress today and typically, she looks incredible
Coronation Street's Gemma and Chesney to discover their baby son Aled is deaf
You may also like
1 day ago
Jeffree Star confirms the discontinuation of two eyeshadow palettes
1 week ago
Vogue Williams calls flat tummy shakes a 'ridiculous product' following Khloe Kardashian controversy
1 week ago
Love Island's Paige Turley thinks ex Lewis Capaldi will 'make a joke' out of her Love Island debut
1 week ago
Ricky Gervais' opening monologue at the Golden Globes was so on fire, we felt burnt
1 week ago
Laura Whitmore shares photo of 'last minute packing' before jetting off to host Love Island
2 weeks ago
The first Lizzie McGuire teaser trailer has dropped ahead of its return this year
Next Page