Well, is it happening?

We've all been fairly glued to Joe Sugg and Dianne Buswell's romance since day one.

And the rumour mill has been working over time lately, with the theory that the pair are engaged.

Bearing in mind that the Strictly Come Dancing stars only officially announced their relationship a few weeks back.

Dianne was spotted wearing a gold ring on THAT finger in a picture that Joe posted on Instagram.

Last day of chillin with this one before we start the tour! ??❤️

And naturally, the world freaked out.

But now, the couple have addressed the rumours of marriage, so we can all return to our lives.

Joe Sugg posted a video to his popular YouTube channel, where he and Dianne spoke about the rumour.

Joe exclaimed: "I'm so confused! I thought we were getting married," with Dianne responding: "I'd want a nicer ring than that!"

So no, these two love birds are not getting married just yet.

I may not have won the glitter ball, but I’ve won something a million times more special. 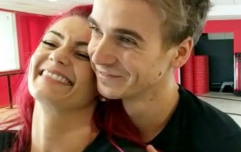 END_OF_DOCUMENT_TOKEN_TO_BE_REPLACED

"If that kind of thing was going to happen, obviously we'd explain it in a better way."

"Dianne and myself have known each other for about what, four months? I mean you're great and everything."

"But I think getting engaged would be a bit OTT."

You'd be right about that Joe, hun.

popular
Apparantly, there is one colour you should never wear at a job interview
Friends Star James Michael Tyler Files For Divorce
Late Late Show viewers are not happy with Ryan's questions for Billy Connolly
Friends actor James Michael Tyler has died, aged 59
10 items from Zara for the perfect autumn capsule wardrobe
9 of the best horror movies on Netflix this Halloween
Say hello to fairy hair, the dreamy new trend popping up all over social media
You may also like
2 years ago
Joe Sugg and Dianne Buswell enjoy luxury romantic getaway after Strictly finale
2 years ago
Joe Sugg CONFIRMS his relationship with Strictly partner Dianne Buswell in a cute snap
2 years ago
This is apparently the reason Joe Sugg refuses to go public with Dianne Buswell
3 years ago
Strictly's Dianne splits with boyfriend amid rumours she's getting close to Joe Sugg
6 days ago
Little Mix's Leigh Anne Pinnock addresses haters in tearful speech at 30th birthday party
6 days ago
It looks like it's all over between Maura Higgins and Giovanni Pernice
Next Page