Jonathan Van Ness has revealed which one of the Fab Five he would most want to swap roles with.

The author and star of Queer Eye was speaking to Ryan Tubridy on RTÉ Radio One after his two sold-out gigs in Dublin.

And when asked if which of the Fab Five roles he would "love" to swap with, it turns out the answer was pretty simple.

"I think I would have so much fun doing fashion." 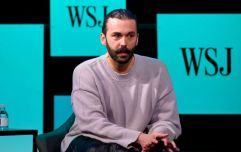 END_OF_DOCUMENT_TOKEN_TO_BE_REPLACED

But there are some categories that JVN admitted he wouldn't feel quite as comfortable stepping into.

"I could never do food or design; I could maybe do culture," he said. "Karamo is really good with hair and makeup as well. I think Tan, Karamo and I [would be good at that].

"I just know, for me, I can't cook or design. I can make like, three things of food that are pretty good - and one of them's coffee."

popular
Will there be a second season of Gilmore Girls: A Year In The Life? Here's what we know
'Beard-baiting' is now apparently a dating trend - and we're all for it
"Like botox, but without needles" – I tested Gua Sha, and the results were impressive
QUIZ: How well do you really remember the first episode of Sabrina The Teenage Witch?
The Queen has banned Meghan Markle from wearing any of Princess Diana's jewellery
QUIZ: Can you name all 32 counties in Ireland in under 4 minutes?
Here's what happens on every day of your menstrual cycle (roughly)
You may also like
6 months ago
Production on season six of Netflix's Queer Eye has begun
11 months ago
WATCH: Queer Eye share the heartwarming first look at special season in Japan
11 months ago
Queer Eye stars mourn the loss of Bruley the French bulldog
1 year ago
Queer Eye just dropped a trailer for season 4 and you'll need tissues to watch it
1 year ago
Queer Eye has been renewed for Seasons 4 and 5
1 year ago
Queer Eye's Tan France to host new Netflix reality fashion show
Next Page