Kate Middleton gets a new title from the Queen and it's very impressive.

The Duke and Duchess of Cambridge, Prince William and Kate Middleton, celebrated their eighth anniversary yesterday and a rather special announcement was shared on the same day.

Queen Elizabeth bestowed Kate with Dame Grand Cross of the Royal Victoria Order (GCVO) for her work over the years as a member of the royal family.

A statement issued on the Royal Family's official website read:

Kate Middleton is a patron of a number of charities including Action for Children, East Anglia's Children's Hospices, National Portrait Gallery, National History Museum and the Nursing Now campaign among others.

The Queen has been pleased to make the following appointment to the Royal Victorian Order. https://t.co/34sJOY8WYt

END_OF_DOCUMENT_TOKEN_TO_BE_REPLACED

The Queen also gifted Camilla Parker-Bowles with the same title in 2012, on the day of her and Charles' seventh wedding anniversary so it appears to be something of a tradition.

As fans of Kate Middleton and Prince William will know, the couple were married in Westminister Abbey on 29 April 2011 and the ceremony was televised, with people all over the world tuning in to see the big moment. 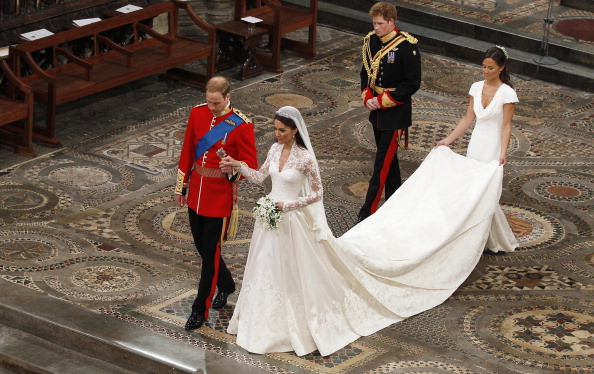 
popular
David Beckham shared his dinner on social media and we really wish he hadn't
Disney Plus announces new titles coming in April
Katy Perry reveals the gender of her first child with Orlando Bloom
19 brilliant books to read while you're social distancing
#Covid-19: Kim Kardashian says lockdown has made her realise she doesn't want more kids
5 new additions to Netflix to spend your weekend watching
10 summmer dresses we are ordering this week to cheer ourselves up
You may also like
1 week ago
Kate Middleton's stunning pink suit is from M&S and it's still in stock
4 weeks ago
Kate Middleton and Prince William share adorable photo from their tour of Ireland
1 month ago
Supermac's to give free dressed fries to anyone named Will or Kate during their Galway visit
1 month ago
Details of Prince William and Kate Middleton's visit to Ireland have been released
1 month ago
Kate Middleton's new runners are from M&S and you can pick them up for €42
1 month ago
'William didn’t feel he could do much to help': Kate Middleton opens up about her experience with severe morning sickness
Next Page