As a mum, one of my very favourite things to do, is create little family traditions that I hope my children will love, cherish and want to recreate when they one day are all grown and have children of their own.

And it seems this is one thing Kate Middleton and I have in common.

The Duchess of Cambridge, 37, recently revealed in a documentary that she herself has a bit of an adorable birthday tradition for her three young children, and really you guys, this is so cute.

END_OF_DOCUMENT_TOKEN_TO_BE_REPLACED

During the BBC special A Berry Royal Christmas, the mum-of-three revealed to celebrity baker Mary Berry that she usually stayed up late to make a cake before each child’s special day.

In the special, Kate and Prince William were joined by Berry, 84, to prepare food as a “thank you” to those who volunteered with their charity organisations over the course of the year.

?? A few of our favourite moments from the #ABerryRoyalChristmas party, which is now available to watch on @bbciplayer. The party was held by The Duke and Duchess of Cambridge and Mary Berry to thank and acknowledge staff and volunteers from charities and organisations who will be working tirelessly over the Christmas period, including: @passagecharity @nursingnow Evelina London Children's Hospital @ldnairamb @actiononaddiction Mountain Rescue services Mother and Baby Units Midwives Fire services Military services Ambulance Services Police Services @centrepointuk @royalmarsden @giveusashoutinsta @childbereavementuk Photos ? by @mattporteous 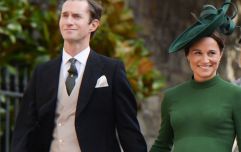 END_OF_DOCUMENT_TOKEN_TO_BE_REPLACED

“It’s become a bit of a tradition that I stay up until midnight with ridiculous amounts of cake mix and icing and I make far too much,” the royal mama could reveal.

What are YOUR special birthday traditions with your own children, mums? We would love to know, so tweet us at @herfamilydotie or share your answer in the comments.