Katie Waissel has announced her split from her boyfriend following the birth of their first child.

The former X Factor contestant revealed that she is now a "solo mama" after an "incredibly hard split" between herself and Andy Speer.

Writing on Instagram, Waissel said that she was beginning a "new adventure" with her son.

"Tonight has been MOMUMENTAL (yes I meant to spell it like that!).

"For the first time in MONTHS, I am sat on my couch in my living room alone watching my favourite tv show and sipping a glass of well deserved wine.

"Having embarked on the new adventure called parenthood alone as a solo mama, there were times I thought that I wasn’t going to make it, but moments like these, small but powerful breakthrough moments, just go to show that it can be done." 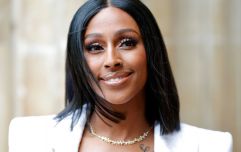 END_OF_DOCUMENT_TOKEN_TO_BE_REPLACED

Waissel, who now lives in New York with her son, was asked by fans if she would consider moving back to the UK following the breakup.

She wrote that it has been difficult living away from her family, but that she had no plans to move home just yet.

She announced the news by tweeting: "And then there were three..."

popular
Man arrested after woman raped on train as passengers filmed it
Nightclubs will return with proof of vaccination under Government's new reopening plan
Jamie Redknapp marries girlfriend without ever announcing engagement
Giovanni serenades Strictly partner Rose after Maura split
"Real-life consequences": Strictly's Adam Peaty addresses near-kiss rumours
Family of four found dead in hotel sauna
Will the clubs be reopening on October 22? Here's what we know so far
You may also like
1 year ago
Love Island band 'No Love Lost' confirm split as Wes Nelson is 'working' on solo record
1 year ago
WATCH: Jahmene Douglas says X Factor was 'traumatising', urges singers to avoid it
2 years ago
Simon Cowell 'didn't have a clue' who the X Factor: Celebrity contestants were before filming
2 years ago
X Factor's Fleur East got married this weekend in the most stunning dress EVER
2 years ago
Simon Cowell to relaunch Celebrity X Factor in desperate bid to save ratings
2 years ago
Robbie Williams and Ayda Field have quit The X Factor after one year
Next Page