Well, this isn't something you hear everyday.

Katy Perry has won a court case against a bunch of nuns.

Yep, the singer went into a court battle after the group refused to sell her a convent.

Katy and the Roman Catholic Archbishop of Los Angeles teamed up to go against the Sisters of the Most Holy and Immaculate Heart after they cut a deal on the convent with a business woman in order to move the popstar out of buying the building.

In 2015, Katy agreed to buy the LA property for $14.5 million (€12m), however before the deal was finalised the nuns decided to sell it to a woman named Dana Hollister.

In an interview, the sisters commented on Katy, saying: “I found Katy Perry and I found her videos and…if it's all right to say, I wasn't happy with any of it.”

The archdioceses then intervened and said that the nuns did not have the right to sell the property (which they vacated in 2011), and acted outside of their authority. 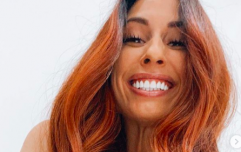 Stacey Solomon: How to turn your old perfume bottle into a fragrance diffuser

END_OF_DOCUMENT_TOKEN_TO_BE_REPLACED

When they brought the nuns to court, the judge said that they acted with “malice, oppression and fraud” and awarded Katy and the archdioceses €8.5m in damages.

Perry’s attorney Eric Rowen told Billboard: “Katy is extremely pleased with the jury’s insight and understanding, and is hopeful that the jury’s decision will pave the way for her to complete the purchase of the Waverly property without further interference."

popular
Nick Cannon's 5-month-old son Zen has passed away
Woman killed in Clare crash named as Peggy Twomey, mother of Marty Morrissey
Mrs Brown's Boys star Fiona O'Carroll split from co-star husband after 15 years
Maura Higgins ends up in A&E with everyone's nightmare injury
Woman in her 90s dies after horrific road crash in Clare
Jess Redden and Rob Kearney jet off on their honeymoon after "incredible" wedding
The Daly Dish's Gina introduces newborn baby Gene to the world
You may also like
2 weeks ago
You can now buy a Christmas tree bed for your pet
3 weeks ago
Millennials are all obsessed with house plants now, obviously
1 month ago
Sage: The kitchen colour you are about to see everywhere in 2022
1 month ago
The correct date you should be putting up your Christmas tree has been revealed
1 month ago
We had a sneak peek at the H&M Home Christmas collection – and it's pure hygge
1 month ago
Goodbye, clutter: This 30-day challenge will help organise your entire life in one month
Next Page