Katy Perry has revealed the gender of her first child with Orlando Bloom.

The singer announced her pregnancy last month in the music video for her latest single, Never Worn White.

And taking to Instagram on Friday, she confirmed that she and her fiancé are expecting a baby girl.

She posted a photo of Bloom, which appeared to be taken at a gender reveal, smiling at the camera with pink cream on his face.

"It's a girl," she wrote alongside the photo, which she location tagged as Girls Run The World. 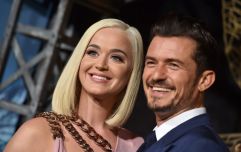 Katy Perry admits to 'friction' in her relationship with Orlando Bloom

END_OF_DOCUMENT_TOKEN_TO_BE_REPLACED

The baby girl will be the first child for Perry. Bloom shares his 9-year-old son Flynn with his ex-wife Miranda Kerr.

After hinting at her pregnancy during a teaser for the video last month, the final moments of the clip show the singer standing in a white dress - giving fans a full view of her bump.

"There’s a lot that will be happing this summer, not only will I be giving birth — literally — but also figuratively to something you guys have been waiting for,” she said in an Instagram Live video after the Never Worn White premiere [via The Daily Mail].

"I’m excited, we’re excited, and happy. It’s probably the longest secret I’ve ever had to keep. I thought I would tell you guys in the best way through a piece of music."