Kevin Clifton has praised his former Strictly Come Dancing partner, Stacey Dooley, as a "miracle" as rumours of a romance between the two continue.

The dancer, who announced he had split from his wife Karen last March, also spoke about how it was "difficult" to be in the public eye.

Speaking at a dance show called Burn the Floor on Thursday night, he said [via The Mirror]:

“In the last couple of years I’ve seen massive upheaval in my personal life and it hasn’t always been easy.

The 36-year-old added that he isn't "the best" at dealing with the negative publicity around his personal life.

“It gets difficult and I’m not the best at dealing with it.

“But at that point Burn the Floor stepped in again and the producers gave me a call and said, ‘Why don’t you come home.’ So it felt right and I came home.

“And thanks to Miss Stacey Dooley, I can finally say I’m the Strictly champion after six years of trying. It’s a miracle.”

Stacey and her partner Kevin Clifton won the last series of the show, taking home the glitterball trophy in September. 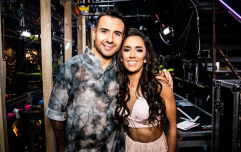 END_OF_DOCUMENT_TOKEN_TO_BE_REPLACED

She then embarked on the Strictly tour afterwards, with her hectic schedule cited as a reason behind her split with her boyfriend, Sam, last month.

However, a few weeks later, Sam decided to come out and say that Stacey had been receiving intimate messages from Kevin while she was competing in the BBC competition.

popular
"I was petrified and wanted a hand to hold:" Irish women call for the ease of maternity restrictions
QUIZ: How well do you remember the first episode of Gilmore Girls?
4 new additions to Netflix to spend your weekend watching
Selling Sunset's Chrishell Stause reveals "the brokerage has split"
5 Netflix releases to keep an eye out for in October
"Winter like" weather on the way for Ireland this week
Paul Mescal didn't win an Emmy and that's okay
You may also like
6 months ago
Kevin Clifton has quit Strictly Come Dancing after seven years
7 months ago
Strictly's Giovanni Pernice and Ashley Roberts split after one year of dating
9 months ago
Daniel O'Donnell declines Strictly Christmas special incase he 'drops dead'
9 months ago
Apparently, a couple of Strictly stars have been 'secretly' getting together this year
10 months ago
'Voguing IS dancing' Michelle Visage's powerful statement following Strictly exit
10 months ago
Neil Jones confirms he will make a comeback to Strictly tonight
Next Page