This must have been a terrifying experience.

The blaze broke out in the Hill Canyon area in the south of California yesterday and spread quickly, jumping a major highway and scorching up to 4,000 acres of land, the Ventura County Fire Department said.

The fast-moving fires were being pushed by 25-30mph winds.

The fire department issued an incident update report on their Twitter an hour ago and said that the cause is still "under investigation."

Kim Kardashian is just one of the thousands of people who have had to flee their homes. Before the incident kicked off, Kim posted pictures of sister Kendall Jenner to her Instagram Stories, who was walking in the Victoria's Secret Fashion Show last night.

Kim was flying home when the Calabasas fire broke out and she told followers she had just one hour to pack up and evacuate her home. She added, "I pray everyone is safe." 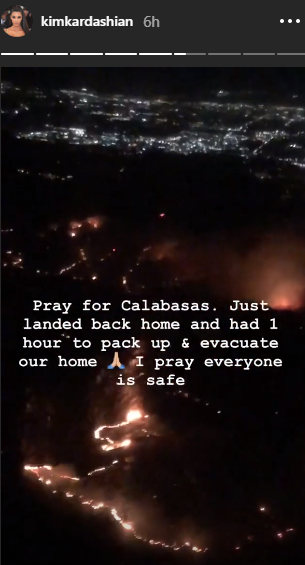 Kim briefly spoke on her Instagram Story, just to explain what was going on:

"They’re evacuating everyone right now from all of our homes", she said.

She also thanked firefighters for their courageous work.

Our thoughts are with everyone affected by the blaze.