What a strange episode.

As always, there is a lot of drama going down on Keeping Up With The Kardashians. Kim, Khloe and Kourtney are not seeing eye to eye and it might mean that the eldest sibling will leave the show.

It appears the Kourtney is trying to distance herself from her sisters - and the show - as she was basically MIA and wouldn't tell Kim and Khloe who she was with or where she was.

Khloe was trying to call Kourtney but she was ignoring her calls. She then text her later saying that she was with the kids - but Khloe was minding Mason and Penelope.

Will Kourt get the boundaries she wants? Find out Sunday on an all-new #KUWTK this Sunday. https://eonli.ne/2RqyaiQ

"I cannot believe Kourtney just got caught in the craziest lie. You're telling me that you're with your kids. But your kids are at my place. Liar," Khloe said to the camera.

Later in the episode, Kourtney explained to the camera: "My sisters are pretty nosy when it comes to anything in my life. I don’t know if they’re bored in their own lives and they want to live through my wild dating life that they think is going on."

Kim and Khloe both complained in the episode that they have to pick up the slack when Kourtney refuses to film anything.

The camera loves the fam, but does Kourt love it back? ? A new episode of KUWTK is TONIGHT on E! 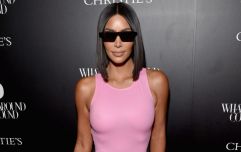 END_OF_DOCUMENT_TOKEN_TO_BE_REPLACED

So, is this the end of Kourtney? If you watched the episode, what was the mysterious hickey about? So many unanswered questions.