Did Kourtney Kardashian and Travis Barker get married?

Fans are speculating that Kourtney Kardashian may have married her boyfriend, Blink 182 drumer Travis Barker, after the star shared a cryptic photo on Instagram.

The couple, who have been dating since December 2020, were visiting Las Vegas to watch Conor McGregor fight Dustin Poirier over the weekend.

END_OF_DOCUMENT_TOKEN_TO_BE_REPLACED

Kourtney posted a series of photos from their trip on Instagram.

Speculation over their possible wedding grew further when the couple's friends and family members chipped in.

Travis' daughter Alabama, for instance, reshared the snaps on her own Instagram story. She embellished her post with a number of heart emojis and captioned it: "So happy for you guys." 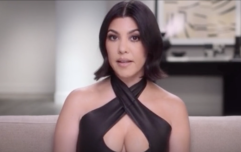 END_OF_DOCUMENT_TOKEN_TO_BE_REPLACED

Meanwhile, Kourtney's hairstylist Glen Coco added further flames to the fire of speculation. He reshared the photos of Kourtney and Travis on his own page, and wrote, ".... NOWWW I understand why ppl tie the knot in Vegas. There's nothing like love AND a good time."

The celebrity stylist added a series of chapel, laughing face and heart emojis to his Instagram post. 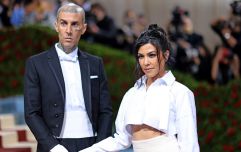 END_OF_DOCUMENT_TOKEN_TO_BE_REPLACED

Kourtney and Travis have neither confirmed nor denied the Vegas wedding rumours, but it wouldn't be totally out of the question.

A few months ago, a source close to the couple told Hollywood Life that Travis would "love" to marry Kourtney. However, they acknowledged that Kourtney was concerned about how the marriage would impact her former partner Scott Disick.

"Those are primary reasons," the source said. "Travis gets that though, and he's very respectful and understanding of her situation with Scott."

On top of that, another source told E! News that the couple "are in it for the long haul" and are ready to take the next step together.

The source added that Kourtney is "the happiest", and that Travis "adores and treats her so well".

popular
Dami explains why he was "angry" during the Love Island reunion
Jacques O'Neill addresses Paige and Adam's relationship on Instagram
John Travolta pays moving tribute to Olivia Newton-John
Emmerdale actor Sam Gannon dies aged 31
Woman (20s) stabbed fives times in attack in Co. Kerry
Barry Keoghan announces the name of his baby boy
Dame Deborah James has followers in tears with final letter to her children before she died
You may also like
2 months ago
Kourtney and Travis' wedding cost a lot of money, unsurprisingly
2 months ago
WATCH: People are losing it over clip of Kendall Jenner trying to climb stairs at Kourtney's wedding
2 months ago
Fashion house Dolce & Gabbana is 'sponsoring' Kourtney and Travis' Italian wedding
2 months ago
Everything we know so far about Kourtney and Travis's Italian wedding
2 months ago
Kourtney Kardashian and Travis Barker have officially gotten married
3 months ago
I tried Kourtney Kardashian's viral breakfast – and now I'm a convert too
Next Page