Younes Bendjima is being sued for allegedly assaulting a bodyguard at Coachella this summer.

According to TMZ, the attack occurred when a security guard wouldn't leave Younes and his girlfriend at the time, Kourtney Kardashian, into a restroom together.

According to the documents obtained by TMZ, security guard Mario Herrera suffered injuries so bad, he had to be taken to hospital where he was treated immediately.

The 24-year-old model has not yet commented on the incident or lawsuit.

Kourtney Kardashian and Younes Bendjima broke up in July after spending two years together. Many believed the pair were back together when they were spotted in an SUV in LA earlier this month, however, it appears the pair met to speak about the split and nothing else.

The split was supposedly fueled by images of Younes getting cosy with another girl, Jordan Ozuna, in Mexico.

The speculation began to arise at the weekend when the pair were seen leaving a nightclub in Chicago together.

The two were spotted partying at TAO before heading to the grand opening of FOUND Hotel, Chicago.

And now, according to a source close to the 39-year-old, the pair have actually been seeing eachother for weeks. 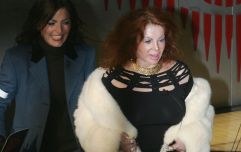 END_OF_DOCUMENT_TOKEN_TO_BE_REPLACED

Speaking to PEOPLE, the source revealed:

"All of their friends know she’s head over heels for Luka.

"None of her friends liked Younes, and they all love Luka even though he’s only 20! They think he’s good for her, and he’s a very down to earth and a good guy."

Kourtney has yet to comment on the speculated relationship.

Girls With Goals || Her · Ep.151: 'A Story Shared' - Aoife P. Rafter on blogging during a pandemic and living with CF
popular
"I tried to imagine how we’d heal:" Meghan Markle discusses miscarriage in candid opinion piece
Love Island's Maura Higgins and Chris Taylor are officially together
Princess Diana's brother isn't happy with The Crown's depiction of his sister's marriage
Camilla receiving online abuse following The Crown's depiction of Prince Charles affair
Zoe Alexander Says X Factor Made Her Look Like a 'Fool'
AOC weighs in on Harry Styles' Vogue cover, says he looks "bomb"
Singer Christina Perri shares loss as baby is "born silent"
You may also like
1 hour ago
Campaign to highlight "sheer scale" of sexual violence in Ireland
20 hours ago
Students in Carlow school told wearing tight PE clothes "distracting" for staff
22 hours ago
Hope Over Silence: Pieta House encourages people to reach out this Christmas
22 hours ago
Scotland to become first country to make period products free
23 hours ago
Motion to phase out greyhound racing funding to be put to Dáil this week
1 day ago
"Vaccine passports" could become a reality for travelling abroad, says Qantas
Next Page