Kylie Jenner has spoken out after receiving backlash for asking her fans for money for a GoFundMe campaign.

Kylie Jenner asked fans on Instagram to donate to her old makeup artist Samuel Rauda's GoFundMe who was involved in an accident and needed some help with medical bill. The GoFundMe was looking for $120,000.

After she posted her fans started to call her out for asking for money even though she's a millionaire and the sum of money would be pocket change to her.

The fundraiser had reached $97,000 over the weekend, $5,000 of which was reportedly a donation from Kylie.

Twitter users called Kylie out for only donating $5,000 and spending more money on a purse than on her friend who's in hospital.

kylie jenner bought her toddler a $15,000 handbag but is asking her fans for money pic.twitter.com/dH4Rua6Imk

END_OF_DOCUMENT_TOKEN_TO_BE_REPLACED

One said: "Kylie Jenner will dead blow 50k on a Hermès bag but not on her friends brain surgery who got in a car accident which could be a life or d.eath [sic] situation ... n proceed to ask humans struggling in a pandemic to donate?"

Another wrote: "Kylie Jenner bought her toddler a $15,000 handbag but is asking her fans for money" 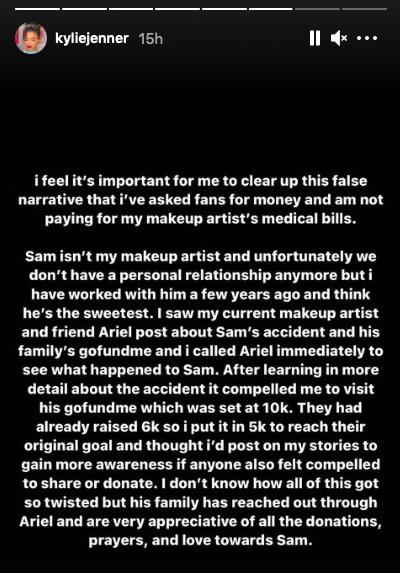 END_OF_DOCUMENT_TOKEN_TO_BE_REPLACED

Kylie took to Instagram to explain her side in a statement, saying: "I feel it's important for me to clear up this false narrative that I've asked fans for money and am not paying for my makeup artist's medical bills."

"Sam isn't my makeup artist and unfortunately we don't have a personal relationship anymore but I have worked with him a few years ago and think he's the sweetest."

She explained: "I saw my current makeup artist and friend Ariel post about Sam's accident and his family's GoFundMe and I called Ariel immediately to see what happened to Sam. After learning in more detail about the accident it compelled me to visit his GoFundMe which was set at 10K." 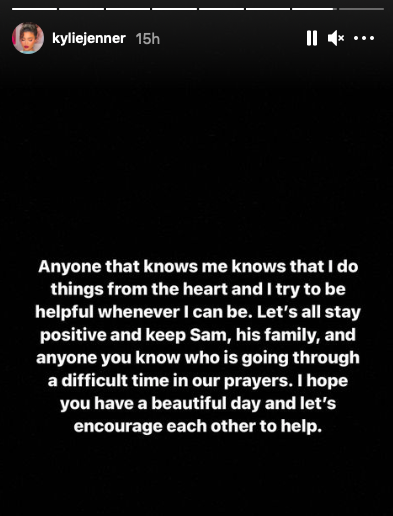 The star went on to say, "they had already raised $6,000 so I put in $5,000 to reach their original goal and thought I'd post on my Stories to gain more awareness if anyone also felt compelled to share or donate. I don't know how all of this got so twisted but his family has reached out through Ariel and are very appreciative of all the donations, prayers, and love towards Sam."

popular
It seems Helen Skelton has accidentally given away who her Strictly partner is
Pop Idol's Darius Campbell Danesh has passed away, aged 41
10 year old trans model becomes youngest to walk in New York Fashion Week
Scarlett Moffatt slams 'disgusting' pap for sneaking into hotel to take photos of her
Greg O'Shea actually left Love Island to go to his granny's funeral
Green Party representative calls for a temporary ban of stag and hen parties in Ireland
Ryanair, easyJet and BA issue warning to anyone boarding with smart bag
You may also like
3 months ago
Kim Kardashian explains why she photoshopped her niece in Disneyland photos
4 months ago
Kylie Jenner felt "rushed" and still hasn't settled on son's name
4 months ago
EXCLUSIVE: The Kardashians speak to Her ahead of their new show debut
4 months ago
Fans are convinced they already know Kylie Jenner's new baby name
4 months ago
Kylie Jenner has changed her baby son's name
6 months ago
Caitlyn Jenner gives update on daughter Kylie's baby boy
Next Page