After months of speculation, the reality TV star took to Instagram this evening to share the news that she had given birth to a "beautiful and healthy baby girl" on February 1. END_OF_DOCUMENT_TOKEN_TO_BE_REPLACED

The news that Kylie was expecting a baby first broke back in September, but the star kept her fans in the dark about her pregnancy until today.

She and Travis Scott welcomed their baby girl on Thursday, February 1. She weighed 8 lbs, 9 oz.

"My beautiful and healthy baby girl arrived February 1 and I just couldn't wait to share this blessing.

"I've never felt love and happiness like this, I could burst! Thank you for understanding."

In her post, Kylie also explained why she had chosen to keep her pregnancy hidden.

She said that to prepare for "this role of a lifetime" she knew she had to be "stress-free."

"There was no gotcha-moment, no big paid reveal I had planned.

"I knew my baby would feel every stress and every emotion so I chose to do it this way for my little life and for our happiness."

Kylie also shared a video detailing "a little glimpse of the last 9 months." 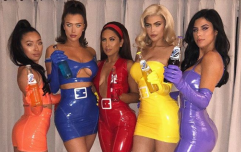 END_OF_DOCUMENT_TOKEN_TO_BE_REPLACED

Kylie, 20, and Travis, 25, got together last April and are said to be head-over-heels in love. The reality TV had only just split from ex-boyfriend Tyga when she and Travis found love - but they're very much the real-deal.

Indeed, last year, a source told PEOPLE Ms Jenner's pregnancy was an "unexpected but completely amazing turn of events that she could not be more excited or thrilled about".

Kylie has always wanted to be a young mum; she previously stated on KUWTK that she feels "like 30 is too late" for starting a family, adding: "Every psychic said that I’m only going to have two kids."

And on an episode of I Am Cait, she also stated that she wanted to be a "young mom". Her own mammy, Kris, was just 23 having Kourtney - the eldest of the Kardashian-Jenner clan.

Kylie was pregnant at 19 and turned 20 in August. Yet she's amassed a fortune through reality TV, sponsorship deals, makeup and fashion lines.

She owns an incredible €10million home in the Hidden Hills area of California and has several investment properties too.

Forbes says Kylie is worth €16.5million and her iconic lip-kits and eyeshadow collections have pulled in €350 million in retail sales in the last 18 months alone.

Girls With Goals || Her · Ep.161: Feeling Peachy - Sharon Keegan of Peachylean on being an absolute BOSS!
popular
Aldi is selling a 2in1 grill and fire pit just in time for summer
Meghan Markle posed with a Kate Middleton magazine cover in 2014
Naomi Campbell welcomes baby girl
Someone has ranked the penis size of men from all over the world
Aldi is selling outdoor string rattan chairs for €30
Trial date set for former nurse charged with murder of eight babies
Here's what happens on every day of your menstrual cycle (roughly)
You may also like
7 months ago
Kylie Jenner boosts US voter registration traffic by 1,500%
1 year ago
Kylie Jenner shows Kim Kardashian her favourite mascara hack and it's actually a game changer
1 year ago
Kylie Jenner shares unseen photo from her pregnancy ahead of Stormi's second birthday
1 year ago
Kylie Jenner sent a message to Jacqueline Jossa and her reaction was priceless
1 year ago
WATCH: Kylie Jenner performed Rise and Shine at a charity event with Justin Bieber
1 year ago
Kylie Jenner's grandmother thinks she knows the reason behind her split with Travis Scott
Next Page