Although the couple had previously kept their relationship out of the public eye, they have been more open about their romance since Kylie turned 18.

The video shows them holding hands, kissing and looking very loved-up in general.

END_OF_DOCUMENT_TOKEN_TO_BE_REPLACED

Their relationship has attracted considerable attention due to the seven year age gap.

Reality TV star Kylie is reportedly head over heels for her 25-year-old beau and is said to be delighted with the finished video. 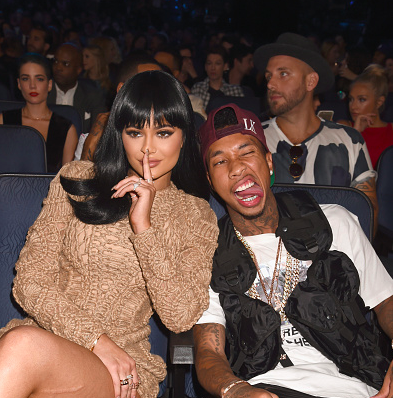 Kylie and Tyga pictured at the VMAs last night

"She’s so proud to call him her boyfriend and nothing could ever change that.

"She knows raunchy music is just part of the rap game and Tyga’s style" continued the insider.

popular
Negative Covid tests will be required to enter Ireland, Cabinet agrees
Father and daughter stabbed to death in London
Pantos can go ahead this Christmas but don't bring the children – Health Minister
Andrew McGinley receives messages of support from RTE staff after cancelled interview
14-year-old boy charged with murder of 12-year-old Ava White
Toy Show's sign language interpreter Amanda Coogan hailed a "national treasure"
Three-month plan needed to manage current Covid wave, says NPHET official
You may also like
5 days ago
Garth Brooks confirmed for five nights at Croke Park
1 week ago
Three months is plenty of time to fall in love, and to have your heart broken
2 weeks ago
Dermot Kennedy announces 2 huge gigs in Dublin next month
2 weeks ago
5 things you may have missed from Taylor Swift's All Too Well short film
3 weeks ago
Travis Scott says he is "absolutely devastated" after eight die at AstroWorld Festival
3 weeks ago
Westlife add second Dublin gig following huge demand
Next Page