Kym: 'Archie gave me Polly - if I hadn’t lost him, I wouldn't have her now'

She's often spoken of the pain of losing her son, Archie, more than 21 weeks into the pregnancy.

And now - eight years on - Kym Marsh has again paid tribute to him, revealing that without him she doesn't believe her daughter would have made it either.

Polly wants to wish everyone good luck for the #Manchester10k today....but of course she wants mummy's team to be the best ? @RMCHcharity pic.twitter.com/5xTCwyR5Oj

The Corrie actress, 40, explained in conversation with The Mirror: "We could all sit down and go, you know what, I have lost a child, I can’t move on. And I fully understand how people can feel like that.

"But there is light at the end of the tunnel," she added. "You can move forward, you can be happy again."

Kym also stated: "I would walk through the door and Polly would be there running round and asking what is for dinner. She doesn’t care whether I have had a bad day or not, she just wants her mum."

She went on to say that she doesn't believe that Polly would have made it had it not been for Archie. Indeed, her doctors, knowing that she was high-risk, monitored her closely during that subsequent pregnancy - something which may well have saved her daughter's life. 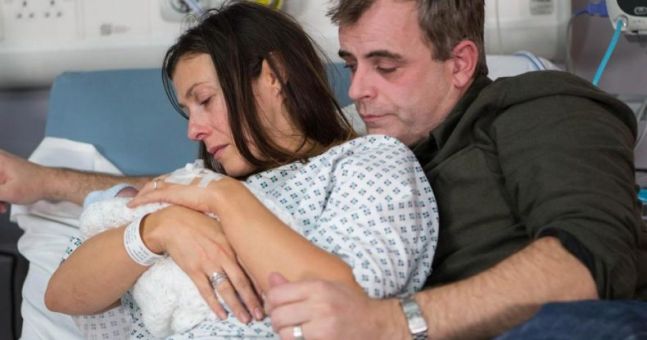 END_OF_DOCUMENT_TOKEN_TO_BE_REPLACED

Polly was eventually born at 33 weeks - weighing in at just 4lbs and spending her early weeks in hospital.

"Obviously Polly is my little miracle. She is six now and there were times when I was pregnant when I didn’t think we were going to have her, and we nearly lost her several times."

Kym added: "We lost Archie and we didn’t think we were going to have Polly."

Earlier this year, Kym explained that not getting a birth-cert for Archie was devastating.

She also said that the term 'late miscarriage' bothered her. ''It really annoyed me and it angered me. I had just given birth to a baby. I didn't miscarry my baby, I gave birth to him, and why is there no birth certificate?'' she asked.

"The clue is in the name, 'birth certificate'. So why? Because he didn't survive? Because he wasn't 'viable'? What is that? When I'm not here anymore, no-one will know that my baby existed.

"And that's the thing that upsets a lot of women, where you can't have a birth certificate,'' she furthermore told Digital Spy.

popular
I tinted my eyebrows with fake tan - and other TikTok beauty hacks you should know
Aldi's velvet stools are just €25 and don't call us basic for wanting a pink one
From Miami to Mallow: The Irish Instagram star who's renovating an old post office during lockdown
After days of silence, Scott and Sofia finally comment on the break up rumours
This amazing hanging egg chair is coming into Aldi next week and go, go go (but safely)!
Can you spot the real Donald Trump tweets among these equally ludicrous fake ones?
So, William and Harry have a step sister... and who knew?
You may also like
1 month ago
Corrie's Jack P. Shepherd shares throwback photos to celebrate 20 years on the soap
2 months ago
Corrie's James Burrows has landed his first role after leaving the soap
2 months ago
Coronation Street star 'in self-isolation' over coronavirus worries
2 months ago
'The hardest goodbye': Corrie's Lucy Fallon pays tribute to Bethany Platt as her final scenes air
2 months ago
Coronation Street's James Burrows shares details about Ali Neeson's exit storyline
2 months ago
Corrie's Ian Bartholomew says it is 'uncomfortable' playing Geoff Metcalfe
Next Page