A massive congratulations to them both.

Though they have yet to announce the news themselves, The Daily Mail snapped a picture of the new family out and about in London.

Laura revealed that she was pregnant last December.

"A lot of things are just for me and my loved ones and we’ve chosen not to share publicly.

"However I want to now share good news as it’s our news to share - and I’m gonna be honest it’s starting to look like my lock down beer belly is out of control. Iain and I are expecting a baby early 2021." 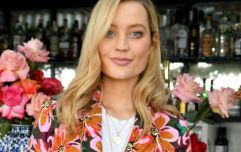 END_OF_DOCUMENT_TOKEN_TO_BE_REPLACED

"It’s been hard to keep such happy news quiet. Especially the times when I’ve had to run out of live radio to get sick in a bin or my penchant for a bowl of mashed potato in the morning.

"I wasn’t hungover like everyone thought. In fact I was completely sober filming the entire series of Celeb Juice, which is quite the accolade! We’d appreciate our privacy respected but just wanted to spread some love and a reminder of the beauty of life."

Laura and Iain met at a party in 2016 and starting dating one year later. The Love Island host and comedian initially tried to keep their relationship to themselves, as Laura flew over to the reality TV set in secret

The pair were married in a private, humanist ceremony in Dublin last November. In line with Ireland's Covid-19 restrictions at the time, they married in front of 25 guests including Laura’s half-brother Adam and Iain’s sister Kirsten, who acted as witnesses.

Girls With Goals || Her · Ep.160: The Beauty Of Coaching - Hayley Harrison joins us from Sport Ireland
popular
Kate Middleton has addressed the rumours that she's pregnant with her fourth child
Why Prince Harry and William aren't walking together at Prince Philip's funeral
The Queen has banned Meghan Markle from wearing any of Princess Diana's jewellery
A royal insider has revealed the truth behind Meghan and Kate's rumoured feud
TV host makes baffling remark about Meghan Markle's 'reaction' to royal family photo
Prince Philip 'advised Prince Harry not to marry Meghan' for a brutal reason
This is how much 91-year-old Queen Elizabeth drinks every day
You may also like
2 months ago
Caroline Flack's ex Lewis Burton shares tribute on anniversary of her death
3 months ago
Laura Whitmore shares photo from 'magical' secret wedding to Iain Stirling
3 months ago
Laura Whitmore calls out those "offended by a pregnant woman's body"
5 months ago
Laura Whitmore: "You can’t control what other people do, but you can control what you put into the world"
8 months ago
Laura Whitmore announces she's written a book and we'll get our hands on it next year!
11 months ago
Laura Whitmore says she 'didn't know how to react' after experiencing miscarriage
Next Page