He was accused by Brazil's President of having an involvement in the Amazon fires.

Actor Leonardo DiCaprio has released a statement after Brazil's President Jair Bolsonaro accused him of having an involvement in the Amazon fires.

DiCaprio posted a message on his Instagram account, where he said that he supports the people who are working tirelessly to secure the Amazon for the future of all Brazilians. 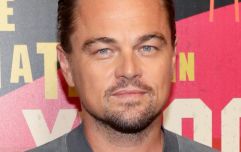 END_OF_DOCUMENT_TOKEN_TO_BE_REPLACED

He said: "At this time of crisis for the Amazon, I support the people of Brazil working to save their natural and cultural heritage. They are an amazing, moving and humbling example of the commitment and passion needed to save the environment.

"The future of these irreplaceable ecosystems is at stake and I am proud to stand with the groups protecting them. While worthy of support, we did not fund the organizations targeted.

"I remain committed to supporting the Brazilian indigenous communities, local governments, scientists, educators and general public who are working tirelessly to secure the Amazon for the future of all Brazilians."

Reports recently emerged that Bolsonaro had made a number of comments about DiCaprio, including saying: "Leonardo DiCaprio, dammit, you’re collaborating with the burning of the Amazon", and "This Leonardo DiCaprio’s a cool guy, isn’t he? Giving money for the Amazon to be torched."

popular
At least seven bodies have been found in search for Brian Laundrie
Here's everything you can *actually* do in a nightclub this Friday
Gogglebox's Paige Deville never wants to speak to mum again after quitting show
Tesco is refunding 27,000 customers after overcharging them
CONFIRMED: Nightclubs to open at 100% capacity, 11.30pm curfew has been removed
The First Quadrillionaire? Paypal Accidentally Gives Man $92 Quadrillion
Three month sentence of Garda for domestic violence is "appalling" says Women's Council
You may also like
1 year ago
Did the president of Brazil just accuse Leonardo DiCaprio of starting the Amazon fires?
2 years ago
Leonardo DiCaprio and Will Smith team up to save the Amazon rainforest - with runners
2 years ago
Leonardo DiCaprio announces chilling new true crime series 'Devil in the White City'
3 years ago
One of our favourite actors was almost in Hocus Pocus and we can't cope
3 years ago
Stranger Things star wants Leonardo DiCaprio for the next series
3 years ago
The most watched Oscar speech of all time has just been revealed
Next Page