Liam Hemsworth took the CUTEST video of Miley Cyrus on their wedding day and ugh, our hearts

In case you totally switched off over the festive break, Miley Cyrus and Liam Hemsworth are now married.

It had been rumoured that the pair tied the knot in an intimate ceremony last weekend and it turned out to be true when Miley took to Instagram on Wednesday to post pictures from the wedding. 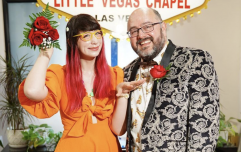 END_OF_DOCUMENT_TOKEN_TO_BE_REPLACED

The special day was attended by close family and friends with the couple deciding to hold the wedding in Franklin, Tennessee, where Miley was born FYI.

The Hunger Games star wore a black suit while Miley opted for an off-the-shoulder white gown by Vivienne Westwood as you'll see below.

And as more and more pictures from their intimate ceremony emerge, we're spending today swooning over this cute video that Liam took of Miley dancing on their wedding day.

Adorable and note Liam's cameo at the end.

Last night Miley also shared her first portrait from the wedding - an image of the star alongside her parents Tish and Billy Ray Cyrus.

Both her mom and dad opted to wear black for the occasion as they posed alongside their second eldest.

Miley and Liam, who met on the set of The Last Song, got engaged in 2012 but broke up a short time later. They reunited in 2015 and the engagement was back on.

They couldn't look more in love and their many fans are clearly over the moon at their news taking to social media to congratulate the happy couple.

popular
Vogue Williams slams man who refused to swap seats with her on plane
Adam Collard allegedly attacked on night out with Paige Thorne
Christine Quinn won't be returning to Selling Sunset
Are we getting a mini heatwave in September?
This is why the world is obsessing over Adidas Gazelles
Phoebe Bridgers and Paul Mescal go sale agreed on West Cork home
Ryanair, easyJet and BA issue warning to anyone boarding with smart bag
You may also like
1 month ago
Graham Norton reportedly tied the knot in West Cork this weekend
2 months ago
First photos of Britney's wedding released and her dress is stunning
2 months ago
Elvis weddings could soon be banned from Las Vegas
2 months ago
Pregnant bride goes into labour on her wedding day four weeks early
2 months ago
Kourtney and Travis' wedding cost a lot of money, unsurprisingly
2 months ago
Singer Cliona Hagan marries Simon Sheerin in Athlone ceremony
Next Page