He became a dad for the first time this year.

And Liam Payne thanked his girlfriend Cheryl for making him a father in a heartfelt Christmas letter to his fans.

The One Direction star looked back at the last 12 months and said welcoming baby Bear was his standout moment that left him "speechless, excited, nervous and surprised”.

“I’ve got to start with Cheryl and my baby boy Bear.

“Holding my baby boy for the first time is an amazing memory I will never forget and watching him grow up is amazing to see.

“Cheryl has been an incredible mother to baby Bear since the day he was born and I can’t thank her enough for that.”

Today, it's Cheryl and Liam's first Christmas as a family of three with Bear, who was born in March - with Cheryl posting a pic of their dog in a Santa hat on Instagram.

"All my family are coming over. We’ll have a big Christmas dinner." 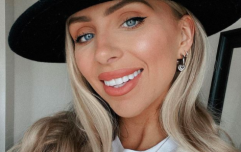 END_OF_DOCUMENT_TOKEN_TO_BE_REPLACED

But Liam previously revealed he wasn't going all out on pressies for nine-month-old Bear.

He told Metro: "It’s my first Christmas as a dad. Best advice I’ve been given? Just buy wrapping paper, and make it really, really shiny, because they’ll only be interested in that."

And they'll be happy to enjoy some time together as Cheryl is going back into the studio in the New Year to record a track co-written by former Girls Aloud bandmate Nicola Roberts.

Girls With Goals || Her · Ep.161: Feeling Peachy - Sharon Keegan of Peachylean on being an absolute BOSS!
popular
Bride dislocates her leg during her first dance in viral clip
Emilia Clarke is set to be the next Marvel superhero
Met Éireann issue thunderstorm warning amidst heatwave
Jennifer Lopez and Ben Affleck just became Instagram official
Cristiano Ronaldo has been called 'racist' for his latest Instagram post
Goodbye McDreamy! Disenchanted officially wraps filming in Enniskerry
Love Island's Danny Bibby speaks out about racism scandal
You may also like
6 months ago
QUIZ: How well can you remember the movie Elf?
6 months ago
Cheers! 3 delicious ways to pimp your Prosecco for Christmas
6 months ago
QUIZ: How well do you know the lyrics to these Christmas classics?
6 months ago
QUIZ: How well do you know the Father Ted Christmas Special?
7 months ago
Here's all the best movies on TV this Christmas Eve
7 months ago
The cheesy nut loaf recipe that's actually not dry and actually is delicious
Next Page