Blogger Chiara Ferragni has confirmed that she and fiancé Fedez are expecting their first child together.

The 30-year-old announced the news in an adorable Instagram post on Saturday, with a picture of her wearing a pink tiara that reads "mother" - while Fedez is wearing a baseball cap that reads "daddy".

The couple got engaged in May this year while the she was celebrating her 30th birthday.

She was marking the occasion with her pals when they stopped by Fedez's concert in Verona, Italy.

She later joined her beau on stage, where he started to sign a special song he had written just for her, which included lines like:

“We don’t need rings to keep us together.” 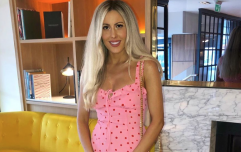 'The truth is I absolutely hated them': Lisa Jordan on having her breast implants removed

END_OF_DOCUMENT_TOKEN_TO_BE_REPLACED

He then dropped to one knee and popped the question, with a stunning solitaire diamond ring.

Ferragni became a social media sensation after launching The Blonde Salad in 2009, which saw her shoot to the top of influencer lists across the globe.

Meanwhile, Fedez is a multiplatinum artist in his own country, where he also sits at the X Factor judges table.

popular
QUIZ: Can you guess the Disney movie from its opening line?
A comprehensive breakdown of the Shane Dawson/Jeffree Star/Tati Westbrook 'Karmageddon' drama
Someone has ranked the penis size of men from all over the world
QUIZ: Can you name the Keanu Reeves movie from just the screenshot?
"One and done" Bonnie Ryan on finding the perfect wedding dress during lockdown
The entire Twilight Saga is coming to Netflix this month, and we're so ready
From blonde to brunette - 6 things I wish I knew before going back to my roots
You may also like
7 months ago
SoSueMe's €4 product to remove Shellac nails is one we all need
8 months ago
Lisa Jordan's daughter had the most amazing cake to celebrate turning 3-years-old
9 months ago
Terrie McEvoy shares her 'favourite thing' from her breathtaking wedding in Portugal
9 months ago
Victoria Magrath of InTheFrow is officially married and you have to see both of her wedding dresses
10 months ago
Rosie Connolly's striking €49 Zara mini dress would work on just about anyone
10 months ago
This girl started an Instagram page for the outfits her boyfriends hates and we STAN
Next Page