They were first spotted together in February, but it looks like things are getting serious between Blac Chyna and her boyfriend, YBN Almighty Jay.

Texas-based YBN is a rapper who is well known for his song Chopsticks, which has gotten more than 11 million views so far. He's also 18 years old. 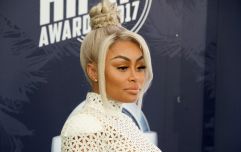 Blac Chyna gets into a scrap at a theme park... and uses her child's toy as a weapon

END_OF_DOCUMENT_TOKEN_TO_BE_REPLACED

And earlier this week, he shared a photo of Chyna on his Instagram - which, y'know, would be pretty standard considering the fact that they're seeing each other.

Except his caption on the photo was what was particularly eye-catching.

Especially since he seemingly asked her to marry him in it.

We've got to say, we've got a lot of questions about this.

Is it a serious proposal? Is it a joke? If it's real...what did she say?! Will they really be walking down the aisle? What does Rob have to say about this?

The mum-of-two doesn't appear to have responded to his proposal publicly yet.

Chyna was previously engaged to Rob Kardashian, and the pair share a 16-month-old daughter named Dream. She also has a 5-year-old son named King Cairo with her ex-fiancé, Tyga.

The 29-year-old and YBN have been romantically linked since February, when they were spotted out on a bowling date.

popular
Liveline listeners call for RTÉ's new property show to be scrapped
Negative Covid tests will be required to enter Ireland, Cabinet agrees
Father and daughter stabbed to death in London
Doctor accused of making TikToks during surgeries banned from performing them
Pantos can go ahead this Christmas but don't bring the children – Health Minister
14-year-old boy charged with murder of 12-year-old Ava White
Toy Show's sign language interpreter Amanda Coogan hailed a "national treasure"
You may also like
4 years ago
Blac Chyna drops all Kardashian sisters except one from her lawsuit
4 years ago
Blac Chyna is suing the Kardashians for physical abuse over nude pics
4 years ago
Dream Kardashian's safety reportedly being assessed by child welfare
4 years ago
This is how much Blac Chyna gets paid for just turning up at a club
4 years ago
Blac Chyna could face jail over recent fall-out with the Kardashians
4 years ago
'Rob has been violent... I'm afraid' What Chyna's legal documents claim
Next Page