Looks like Kate Beckinsale has a new fella... and it's David Walliams

Of course it is.

It looks like Kate Beckinsale has a new fella and it is of course, unsurprisingly, absolutely saw this coming, David Walliams.

Just kidding, nobody saw this coming at all.

This is random as f*ck.

The pair were seen looking extremely cosy as they stared longingly into one another's eyes while watching Stevie Wonder perform over the weekend. 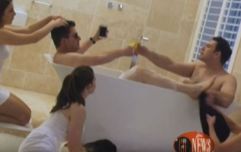 PIC: People Are Freaking Out About Pictures Of Simon Cowell 'Naked In A Bath' With David Walliams

END_OF_DOCUMENT_TOKEN_TO_BE_REPLACED

Images obtained by The Sun show Beckinsale and Walliams inches away from mauling the faces off one another from the privacy of a private box that wasn't actually that private at all.

“David couldn’t keep his eyes off Kate – they looked smitten," said somebody who allegedly saw the whole thing unfold.

Walliams also shared a photo of them watching the gig to his own Gram so, you know. It's canon. 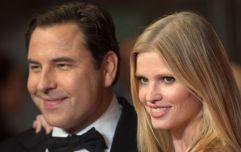 Lara Stone Is Reportedly "Filing For Divorce" From David Walliams

END_OF_DOCUMENT_TOKEN_TO_BE_REPLACED

This comes after Kate ended her quasi-relationship with Pete Davidson earlier this year.

The pair dated for about four months following the SNL comedian's split from Ariana Grande, to whom he was engaged.

While some reports suggested that the couple were simply "slowing things down", others claimed that they were entirely done with each other romantically, but still remained on good terms.

Before this, Beckinsale had an eight-year relationship with actor Michael Sheen in the 1990s and early 2000s until marrying director Len Wiseman in 2004.

They announced their split in 2015 citing irreconcilable differences.

Walliams has been single since ending his marriage to Lara Stone in 2015.

popular
Netflix's true crime series Sins of our Mother is seriously insane
So, William and Harry have a step sister... and who knew?
Why Are Men so Obsessed With Boobs? The Answer is Pretty Surprising...
Singer Ciara cancelled her wedding over transphobic laws
Get Out has officially dropped on Netflix and we know what we're watching tonight
Family tree reveals Prince Harry and Meghan Markle are related
A Criminal Minds re-boot is happening – and here's everything we know
You may also like
4 years ago
Channing Tatum appeared on BGT and people lost it completely
4 years ago
David Walliams 'appalled' by harassment claims at 'men's only' charity dinner
4 years ago
David Walliams slammed for 'racially insensitive' costume
4 years ago
David Walliam's holiday snaps causes outrage among followers
7 years ago
And The Winner Of Britain's Got Talent 2015 Is...
7 years ago
Tensions Are Running High on the Britain's Got Talent Judging Panel
Next Page