The pair were first spotted together in April in Vancouver, where Centineo was filming the back-to-back sequels to To All The Boys I've Loved Before.

Many people have reportedly spotted them being super cute and cuddly together, with Noah even collecting her from the airport a while ago.

However, neither Ren or Centineo have publicly confirmed their relationship - until now.

The 23-year-old actor took to his Instagram Stories earlier this week, where he posted a video of himself cuddled up with the model  on a sofa.

Centineo will be next seen on the big screen in the upcoming Charlie's Angels reboot.

He will also be reprising his role as Lara Jean Covey's love interest, Peter Kavinsky, in the upcoming sequels to To All The Boys I've Loved Before. 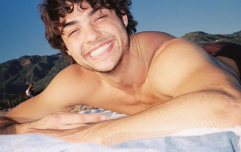 It looks like Noah Centineo has a gorgeous new girlfriend

END_OF_DOCUMENT_TOKEN_TO_BE_REPLACED

To All the Boys: P.S. I Still Love You will land on the streaming service on 12 February 2020; just in time for Valentine's Day.

However, there is no release date set yet for the third movie.

The original To All The Boys, released in the summer of 2018, was a major hit.

The charming teen romance was, Netflix said, "one of our most-viewed original films ever with strong repeat viewing".

We're not one bit surprised. Roll on February 2020!

popular
PERSONALITY QUIZ: Which Normal People character are you?
There's a special offer that lets you stay at TWO Irish castles the summer, and it's the five-star holiday of our dreams
From Miami to Mallow: The Irish Instagram star who's renovating an old post office during lockdown
The Skin Nerd on updating your lockdown skincare routine, and picking spots - if you HAVE to
5 ways you can help the George Floyd protesters and Black Lives Matter movement
I tinted my eyebrows with fake tan - and other TikTok beauty hacks you should know
After days of silence, Scott and Sofia finally comment on the break up rumours
You may also like
6 months ago
QUIZ: Which 2019 Charlie's Angel are you?
1 year ago
Watch: The trailer for Noah Centineo's new Netflix movie has dropped and OMG
1 year ago
Noah Centineo is officially the newest face of Calvin Klein
1 year ago
Lana Condor says fans will be 'conflicted' over this part of the To All The Boys I've Loved Before sequel
1 year ago
Lana Condor told the world about meeting Noah for the first time and it sounds perfect
1 year ago
'There's going to be a major new love interest' in the TATBILB sequel
Next Page