According to the star and her sister, the duo thought they were "going to die abroad".

Love Island star Anna Vakili has revealed the horrifying story behind her botched bum lift which left her passed out on the floor with "blood all over the hotel room".

The reality TV star, social media influencer and pharmacist, who starred in the season five of the popular dating show in 2019, had already had a successful Brazilian bum lift which she was pleased with.

However when she and her sister Mandi flew to Turkey for a second procedure, the outcome was apparently near-fatal.

Speaking on their joint-hosted Sisters in the City podcast, Anna explained: "A Brazilian butt lift is a fat transfer where they take fat from other parts of your body and they put it into your bum. 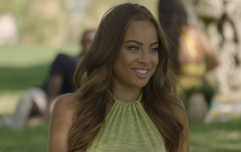 END_OF_DOCUMENT_TOKEN_TO_BE_REPLACED

"When we first did it, it was really good. We went to a really good place in London, a reputable surgeon, recovery... good. Minimal scars."

The star said she didn't regret the first one as it made her feel more confident - but then they went "too far" and did it again.

Anna and her sister Mandi host a podcast together (@annavakili_)

Her sister Mandi said: "We ended up like Frankenstein. The second time we went, we wanter a cheaper option so we went abroad. Do your research thoroughly - if it's cheap, it's cheap for a reason."

Expanding on the horrifying story, Anna said: "The second time we did it, we went abroad to Turkey and me and Mandi thought we were going to die abroad. It was very scary.

"After our surgery, within a day or two, we were in a hotel room about to faint with blood all over the hotel room.

"It was like a murder scene, we both collapsed in hotel room. Bandaged up, bleeding... it was like a horror movie."

END_OF_DOCUMENT_TOKEN_TO_BE_REPLACED

Concluding their cautionary tale, the Love Island star said: "So many people die. It's one of the most invasive surgical procedures, a BBL, and it's one of the most complicated and dangerous ones, so don't take the decision lightly.

"Without surgery, you have a body that's not full of scars."

Posting on Instagram on Tuesday, Anna shared another warning to anyone considering surgery.

She highlighted the "constant pressure" to look a certain way, adding: "Everyone should do whatever makes them happy as long as they are doing it for themselves, they’ve done their research and are sure of their decision."