Love Island's Curtis Pritchard has responded to reports that he has moved on after splitting from Maura Higgins.

The former couple, who placed fourth in Love Island 2019, broke up earlier this month.

Since then, the 24-year-old was said to have moved on with dancer Bethany Hall, who he performing with on 'AJ's Live' tour. 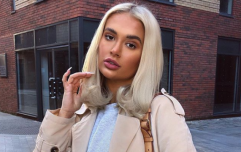 END_OF_DOCUMENT_TOKEN_TO_BE_REPLACED

But a spokesperson for Curtis has insisted that he's not "looking for a relationship right now" and, instead, is focusing on his career and his family-time.

"Curtis isn't looking for a relationship right now – he's focusing on his career and he's spending time with his family," they told The Mirror.

Maura revealed earlier this month that she and Curtis had broken up after seven months together.

"Curtis and I have made the decision to separate," she said, as she shared a statement on her Instagram Stories.

"We enjoyed a great experience from our time in the villa and want to thank everyone for supporting our relationship.

END_OF_DOCUMENT_TOKEN_TO_BE_REPLACED

"There is no easy way to get through a breakup and no bad feeling on either side.We tried to make it work but it wasn't too be and I wish Curtis nothing but the best future."

Since then, they have been rumoured to be taking part in Ex on the Beach - although a source told The Sun how neither of them was "keen" on the idea of hashing out their relationship on telly.

And while she was rumoured to be taking part in the next series of Celebs Go Dating, Maura - and her rep - previously to The Evening Standard that that was "definitely not" the case.

popular
Hollywood couple Joe Manganiello and Sofia Vergara seen enjoying a Cork chipper
You can now apply for tickets to the Late, Late Toy Show
Shirley Ballas books breast exam after Strictly viewers spot lump
You can now get paid to eat wine and cheese for Christmas
An immersive Fifty Shades of Grey experience is coming to London this month
You can now live in the iconic house from Sabrina The Teenage Witch
Irish TikTokers are telling their dads they paid €50 for 'premium air' in their tyres
You may also like
1 week ago
Jack Fincham says he attempted suicide after Love Island
1 week ago
Love Island's Liberty Poole confirmed for Dancing On Ice
2 weeks ago
Molly-Mae Hague needs a second surgery to treat her endometriosis
2 weeks ago
Love Island’s Jake reveals he no longer speaks to any of the girls from the villa
2 weeks ago
Love Island's Lucinda is officially back with Irish footballer Aaron Connolly
2 weeks ago
Love Island's Liberty is creating her own collection for In The Style
Next Page