We did not see this one coming.

Love Island's Eyal Brooker might have been unlucky with love in the Love Island villa but almost a year later, it appears as though he's off the market.

Earlier this month, the Love Island star was spotted getting cosy with Delilah Belle Hamlin in Los Angeles. The pair who were spotted on various dates around LA, getting snapped having lunch and dog walking in West Hollywood as well as attending Coachella together are now apparently an item.

Delilah is the daughter of Lisa Rinna and Harry Hamlin. Lisa starred as Bille Reed in the hit soap Days of Our Lives and more recently, in Bravo's reality TV series Rich Housewives of Beverly Hills.

Sharing confirmation that her eldest daughter was seeing Eyal, Lisa shared an image of the pair to her Instagram story writing: "Ahhhh youth". 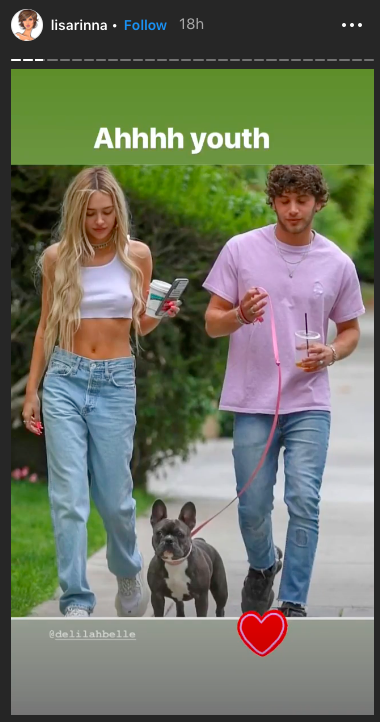 END_OF_DOCUMENT_TOKEN_TO_BE_REPLACED

Eyal has also been seen leaving thirsty comments on Deliah's images again, leading us to believe the pair are an item.

Eyal recently sent fans into overdrive that he was heading back into the Love Island villa when he was seen boarding a plane to Palma, Mallorca (where the show is filmed) but Eyal has confirmed it's only for a modelling shoot and revealed that it's actually a "relief" that he's not heading back to the villa.

popular
Hollywood couple Joe Manganiello and Sofia Vergara seen enjoying a Cork chipper
You can now apply for tickets to the Late, Late Toy Show
Shirley Ballas books breast exam after Strictly viewers spot lump
You can now get paid to eat wine and cheese for Christmas
An immersive Fifty Shades of Grey experience is coming to London this month
You can now live in the iconic house from Sabrina The Teenage Witch
Irish TikTokers are telling their dads they paid €50 for 'premium air' in their tyres
You may also like
2 days ago
Husband of world champion runner Agnes Tirop arrested over death
3 days ago
Are we really still debating whether contraception is a good thing?
3 days ago
Tributes paid to Limerick based blogger and model Patrick McLoughney
4 days ago
Olympian and world champion runner Agnes Jebet Tirop found dead in home
4 days ago
Met Éireann warns of 'potential hazards' as weather set to change this week
4 days ago
Brian Laundrie's family issue statement after Gabby Petito cause of death
Next Page