Jess' affordable second wedding dress sold out straight away, but we found two REALLY similar ones.

The couple are the second pair to get married after Olivia Buckland and Alex Bowen.

Both Jessica and Dom have shared their cover of OK! magazine, who had exclusive coverage of their big day.

The best day of my life ? after an amazing week with our closest friends and family celebrating we are super excited to now share with you all our wedding pics. Pick up @ok_mag out tomorrow ?

Since it emerged, everyone has been talking about the stunning beaded dress Jessica wore on the day which is from an Austrailian designer called One Day Bridal.

"I stumbled across them on Instagram earlier this year and fell in love with their designs.

"As they're based in Australia, I sent over my measurements and had to hope it fitted when it arrived! I only had a few months before the wedding so it was very last minute."

It has now been reported that Jessica's second dress was from online brand, Missguided and it was very affordable!

The simple full-length white dress had a slit to the front and while it is unfortunately sold out, we spotted two that are almost identical. 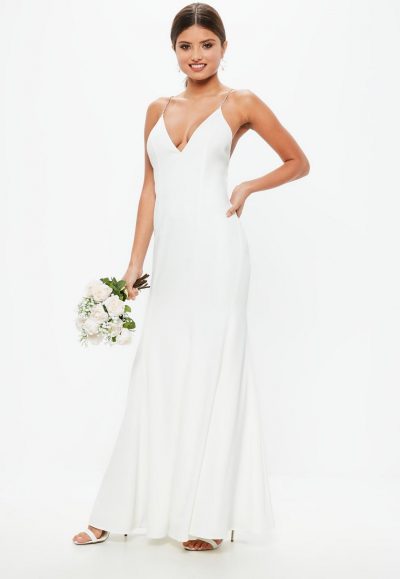 This look-alike gúna is down to €71, but is currently only available in a UK size 16.

Fear not however, we found a second alternative that is a steal for only €38 and still has a good few sizes available on the site. 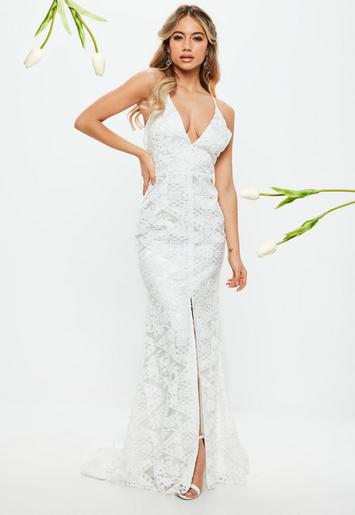 The slit and plunging neckline has a very similar feel to the one Jessica wore. The dress would make an ideal second wedding dress, or would be suitable for a ball or debs.


popular
Celebrities have nothing but praise for Jennifer Aniston's 'morning after' post
Holly Willoughby's checked Zara skirt is the perfect way to dress up your everyday look
The flattering €16 Penneys dress we'll be wearing every day for the foreseeable future
Meghan Markle's new title is likely to be changed, as she's now styled like a divorced woman
Louise Cooney just wore a gorgeous €65 coat from Pretty Little Thing and we ADORE it
So, William and Harry have a step sister... and who knew?
Penneys has launched a new Baby Yoda collection - and not going to lie, we want it
You may also like
10 hours ago
#JusticeForNas: The Love Island contestant that truly does deserve better
13 hours ago
Things are going to get intense for Rebecca on Love Island tonight
1 day ago
Leanne and Mike have their first date on Love Island tonight... and it looks steamy
2 days ago
Everything you need to know about bombshell Rebecca who just entered the Love Island villa
2 days ago
Love Island: Sophie steps in as the boys give Connagh grief
2 days ago
Family of Love Island's Mike Boateng release a statement regarding publication of 'false stories'
Next Page