The star was robbed on her way to a stage production of Disney's Frozen.

Love Island's Lucinda Strafford has opened up about being robbed by someone wearing a balaclava.

The thief stole her phone before quickly speeding off on a motorcycle. Lucinda had been walking to see Frozen The Musical at Theatre Royal Drury Lane in London when the alleged incident occurred.

END_OF_DOCUMENT_TOKEN_TO_BE_REPLACED

Sharing a photo of the event to her Instagram story, the 22-year-old wrote:

"Not everyday you walk to see Frozen The Musical and your phone gets snatched out of your hand by someone wearing a balaclava on a motorbike.

She added that it’s "so awful there’s people out there like that" and told her followers to "make sure to hold your phones extra tight". 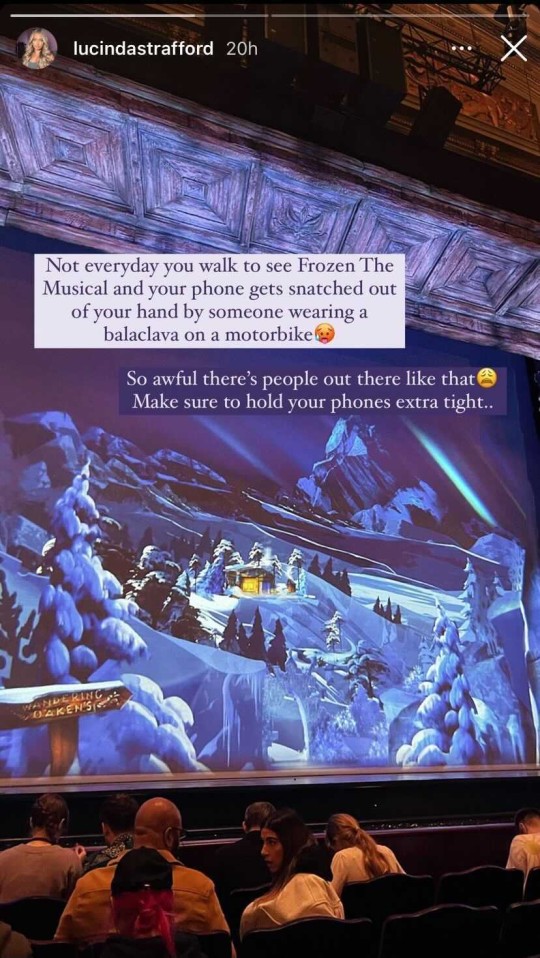 END_OF_DOCUMENT_TOKEN_TO_BE_REPLACED

Later, Lucinda shared a picture of an Olaf teddy she purchased at the show to cheer herself up, updating fans that she didn't get her phone back.

"In other news this is the cutest thing ever - defo cheered me up anyway and there's worse things going on in the world," she said. "For all those asking, no I didn't get my phone back."

END_OF_DOCUMENT_TOKEN_TO_BE_REPLACED

The theft comes shortly after previous Love Island stars Molly Mae Hague and Tommy Fury had their apartment in Manchester broken into.

The pair have since moved out of the apartment with Molly Mae admitting she felt "guilty" about the incident.

"I think seeing a lot of things on social media and seeing a lot of people’s opinions about why we were robbed, I started to feel like, God was this my fault? Do I share too much? Did I do the wrong thing?

"It was without a doubt the worst thing that’s ever happened to me, to us, I’d probably say."