Last month, the Love Island winner was reported to have been scouted for the upcoming season of the popular reality TV show.

However, The Sun report that Dancing On Ice producers met with "several contestants" from Love Island - eventually deciding to sign Maura Higgins up for the series, instead.

“Dancing On Ice producers were always going to sign a Love Island star for next year’s series and they wanted a girl this time after having two guys in the past.

“It was looking hopeful for Amber but Maura pipped her to the post with her sense of humour and personality.

“Maura is hoping Curtis can now teach her more moves, even though she will be on the ice.”

It comes as, on Wednesday, the pair spoke about their relationship - and why they haven't gone 'official' yet. 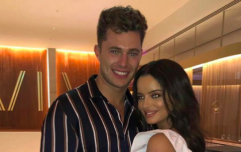 END_OF_DOCUMENT_TOKEN_TO_BE_REPLACED

Speaking on This Morning, Curtis admitted he was "caught off guard" by Phillip Schofield and Holly Willoughby's question.

"I haven't asked her to be my girlfriend," he told the hosts. "I am not going to do it on TV."

"It's just because we don't put everything on social media. We don't have to prove to other people that we're together.

"We know we're happy, so that's all that matters. A lot of the Islanders have seen each other a lot more."

popular
Paul Mescal wore O'Neill's shorts while carrying cans of pink gin so I bought O'Neill's shorts and cans of pink gin
This amazing hanging egg chair is coming into Aldi next week and go, go go (but safely)!
5 reasons why we need more videos of Doireann Garrihy's new puppy immediately
The creator of Big Little Lies is teaming up with Netflix for a gripping new thriller
After days of silence, Scott and Sofia finally comment on the break up rumours
Her Quarantine Quiz Week 9: Iconic Irish music videos
PSA: White Claw Hard Seltzer is launching in Ireland next month
You may also like
2 months ago
Love Island's Curtis responds to rumours he has moved on after split from Maura
3 months ago
'I really did want to stay' Maura Higgins is the latest skater to get eliminated from Dancing On Ice
3 months ago
Caprice Bourret quits Dancing on Ice and releases a statement to explain her decision
3 months ago
Maura Higgins going full Kardashian, and the rest of the top red carpet looks at the National Television Awards
4 months ago
Curtis Pritchard addresses the rumours that he cheated on Maura Higgins
4 months ago
Footage emerges of Curtis Pritchard apparently cheating on Maura Higgins
Next Page