Love Island's Theo Campbell goes blind in one eye after champagne cork "split it in half."

The 28-year-old took to Instagram on Tuesday to share the news, as he thanked his followers for all messages ad support.

Posting a photo of himself and girlfriend Kaz Crossley, he said:

"So yeah basically 2 eye surgeries later after a really unfortunate accident, I’ve lost all vision in my right eye as it got split in half, who would have thought a champagne cork would be the end of me.

"But I still have 1 eye left, looking at the bright side of things."

Theo, who appeared in the 2017 series of Love Island, thanked Kaz for flying out to be by his side. 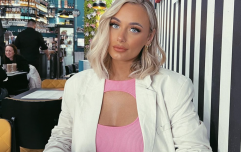 END_OF_DOCUMENT_TOKEN_TO_BE_REPLACED

The couple confirmed their romance earlier this year, after meeting during a trip to Thailand in March.

A source told OK! Magazine at the time that although they are seeing each other, they're taking it slow for the minute.

“They’re seeing how things go and taking it day by day. They’re having fun and getting to know each other," they said.

The pair got together on the show after Josh dumped Georgia (loyal, babe) in favour of newbie Kaz when he met her in the second villa midway through the series.

The pair stayed together for a few months before parting ways earlier this year.

"Sometimes things don’t go the way you planned, but you have to be grateful for the journey. Thank you for everything especially showing me how to love myself again."

popular
Wagatha Christie: Rebekah Vardy storms out of court just 30 minutes into final day
Claire Byrne Live viewers in shock as woman shares family DNA secret
Only a matter of time before monkeypox spreads to Ireland, says expert
Denis Sulta had a cameo in Derry Girls alongside his girlfriend Saoirse-Monica Jackson
Someone has ranked the penis size of men from all over the world
Here's the top 10 Louis Theroux docs streaming on Netflix right now
How to INSTANTLY unblock your stuffy nose (we swear this works)
You may also like
15 hours ago
Everything we know about Love Island 2022 so far
1 day ago
Love Island rejects fast fashion for second-hand clothes
6 days ago
New Love Island trailer pokes fun at every other dating show
1 week ago
Dani Dyer has fans convinced she's engaged to West Ham player Jarrod Bowen
1 week ago
PSA: The teaser trailer for Love Island is here
6 days ago
Chrishell Stause's new partner G Flip on if they want children
Next Page