Love Island runner up Toby Aromolaran has been to every corner of Ireland over the past week, or at least it certainly feels like he has.

After taking a quick trip to Mayo with his Irish mammy Victoria to visit her hometown, the mother and son made their way back to Dublin and stopped by RTÉ Radio One to tell all about their favourite memories from the west. 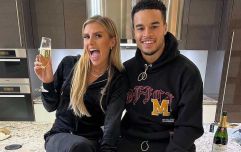 Love Island fans are convinced Toby and Chloe have split up

END_OF_DOCUMENT_TOKEN_TO_BE_REPLACED

Living in London since 1990, Victoria said she would bring Toby back to Mayo every summer on his holidays to visit his cousins here.

END_OF_DOCUMENT_TOKEN_TO_BE_REPLACED

"I just dropped them off and then went back!" laughed Victoria.

"We didn't have a clue until she went!" Toby added.

Not having a notion she wasn't coming back to get him for a while, Victoria would simply sneak out the front door after distracting her children.

"They went out from morning to night and they only came back when they were either dirty or hungry so that was it."

"That was the good old days. I was chasing frogs around in the fields, running after cows - it was weird!"

"I think you fell into a stream at one stage as well," offered Victoria.

"The best memories," Toby added at the end of their chat.

But it wasn't just Mayo he came to talk about, managing to gush about his girlfriend Chloe Burrows, who also came second on the ITV dating show.

And mum Victoria seems to be just as impressed as he is with her, saying: "[She's] The first girl he brought home. She's beautiful. Absolutely beautiful."

popular
Bride asks for divorce day after wedding following groom's disrespectful cake stunt
The Greatest Showman is becoming a Broadway musical and we need a second
These are the most popular names for babies born in February
Gwen Stefani reportedly pregnant with baby number four
Natalie Imbruglia's Torn is actually a cover and the original just isn't the same
Police believe they know what happened to missing dog walker Nicola Bulley
Here Are The Top 20 Most Common Pin Codes in The World
You may also like
1 year ago
Love Island's Toby and Chloe are officially coming to Mayo
1 year ago
Chloe wants a "flamboyant" wedding proposal from Toby
1 year ago
The voting figures for the Love Island final have been released
1 year ago
Looks like Toby and Chloe have made it official on Love Island
1 year ago
Could Toby and Chloe win this whole thing?
5 days ago
Love Island's Haris spills all on an unaired fight between Zara and Tanyel
Next Page