Lupita Nyong'o calls out Grazia for photoshopping her in this way

Lupita Nyong'o has called out Grazia for photoshopping her photo.

The actress criticised the publication's decision to edit out and "smooth" her hair on the cover of their latest issue.

"Disappointed that @GraziaUK edited out & smoothed my hair to fit a more Eurocentric notion of what beautiful hair looks like."

Disappointed that @GraziaUK edited out & smoothed my hair to fit a more Eurocentric notion of what beautiful hair looks like. #dtmh pic.twitter.com/10UUScS7Xo

The Kenyan-Mexican actress, best known for her roles in 12 Years a Slave and Star Wars, appears to have a shaved head on the cover of the magazine's UK November issue.

However, as the photos tweeted by Nyong'o on the right reveal, she actually had her hair in a low ponytail for the shoot.

In a post shared on her Instagram, she explained further why she was so disappointed with the edit.

"As I have made clear so often in the past with every fiber of my being, I embrace my natural heritage and despite having grown up thinking light skin and straight, silky hair were the standards of beauty, I now know that my dark skin and kinky, coily hair are beautiful too.

"Being featured on the cover of a magazine fulfills me as it is an opportunity to show other dark, kinky-haired people, and particularly our children, that they are beautiful just the way they are.

Nyong'o went on to state that had she been consulted about the edit, she would not have supported it.

"I would have explained that I cannot support or condone the omission of what is my native heritage with the intention that they appreciate that there is still a very long way to go to combat the unconscious prejudice against black women's complexion, hair style and texture." 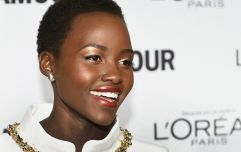 END_OF_DOCUMENT_TOKEN_TO_BE_REPLACED

The actress's post received much praised online, with Instagram users expressing their own shock and disappointment that much of Nyong'o's hair had been removed from the image.

"That’s a disgrace. Would not have expected that from Grazia," wrote one person.

"First Solange now you??? Why are the UK magazines like this?" asked another.

Similar criticism was made by Solange Knowles last month when she discovered that London Evening Standard magazine removed the entire top of her hairstyle.

The singer Instagrammed a photo of the original image with the caption #dtmh.

Girls With Goals || Her · Ep.154: Scholarship Squad Take 2 - Smurfit alum Grace Milton
popular
'They're Dead To Me Now' - Kate And Oliver Hudson Have Been Disowned By Their Father
Someone has ranked the penis size of men from all over the world
WATCH: A documentary about the two men who got married to avoid tax is coming to RTÉ
It's a Sin: Bump Channel 4's latest drama to the top of your watch-list
Sex dreams: What do they mean and why do we have them?
Police called to "illegal rave" in UK to find pensioners queuing for vaccine
Kourtney Kardashian and Travis Barker are officially dating
You may also like
2 years ago
This is, without a doubt, the nicest bodycon dress we've seen since 2011
3 years ago
That Rihanna and Lupita Nyong'o heist movie is happening and we're buzzing
5 years ago
A New Leading Man For Lupita Nyong'o?!
6 years ago
Her Look of the Day - Lupita Nyong'o in Chanel Couture
6 years ago
Lupita Nyong’o Shares The Time She Realised Dark Skin Was Beautiful And It’s Really Moving
6 years ago
Her Look of the Day - Lupita Nyong'o Wears Bally Spring 2015
Next Page