After a horrible split following Made In Chelsea's Croatian special, it looks like Digby and Liv have decided to forgive, forget and start anew.

Making their first public appearance together as a couple again, the pair joined forces with fellow Made In Chelsea star, Ollie Locke for a day at the races.

Arriving at Cheltenham, the two cosied up to eachother as they took shelter underneath an umbrella. Sharing a snap from the event, Digby made sure fans knew the pair were an item again by sharing the picture alongside Olivia. 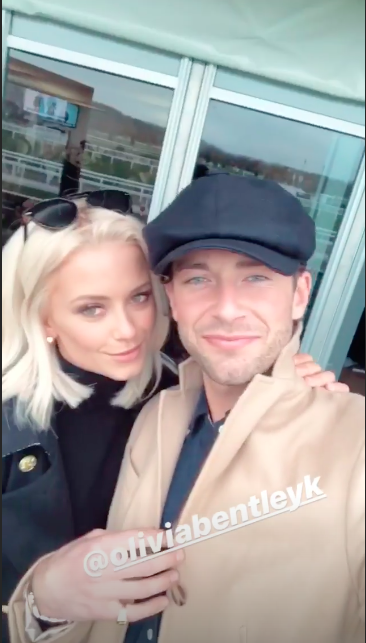 Previously speaking about her split post-Croatia, Liv chatted to the Daily Mail saying:

"Digby never listened when I tried to talk to him. I would have a conversation about things and if it didn’t go well we'd have an argument in Croatia and because everyone else was out there they'd get involved and it all just turned nasty.

"They would then have a go at me. And yet they're my friends, too."

Continuing Digby too recalled how difficult the breakup was especially when he had to see Liv as they continued filming Made In Chelsea.

"I mean, it's been an emotional rollercoaster!' he said. 'It’s hard going through a break-up, but having to see Liv quite a bit is difficult.

"We have been through rough patches on camera and it's tough. It's also rough not seeing her. It’s just a case of trying to be civil."

We're looking forward to seeing these two back together in the new series that kicks off next month.

popular
Vogue Williams slams man who refused to swap seats with her on plane
Crown Paints advert receives 200 complaints over 'misogyny' and 'everyday sexism'
Man arrested on suspicion of the murder of Irish man in London
Are we getting a mini heatwave in September?
Adam Collard allegedly attacked on night out with Paige Thorne
Tasha Ghouri shuts down "ableist" comments of how she acts as a deaf woman
This is the exact date the weather will get warm again
You may also like
1 day ago
Are we getting a mini heatwave in September?
1 week ago
Galway dog charity sees surge in owners surrendering dogs
1 week ago
650 children strip-searched by Met Police in 2 years, report finds
1 week ago
The cost-of-living crisis is having a disproportionate impact on women, charity warns
2 weeks ago
Government approves new standalone stalking offence Bill
2 weeks ago
Archie Battersbee's life support treatment to end at 2pm tomorrow
Next Page