Maia Dunphy Chats To Us On Breaking London, Life As A New Mum And Plans For Her Halloween Costume

She’s one of our favourite presenters and when she’s not busy working out exactly what us Irish women want, Maia Dunphy is working away on breaking London, caring for son Tom and writing her book.

We caught up with the new mum Maia ahead of her role as ambassador for Temple Street Children’s Hospital Trick or Treat Campaign supported by MiWadi.

How are you enjoying being a new mum? Are you getting much time off?

END_OF_DOCUMENT_TOKEN_TO_BE_REPLACED

Oh it’s lovely. Everything I say is taken out of context like “Maia is shattered” and I’m thinking wow, find me a new mum that isn’t shattered. But there’s all the wonderful stuff too. It’s wonderful but it’s strange.

I’ve come back to do some promotion work for the two shows I’m doing for RTE, which I was filming while I was pregnant, so I kind of haven’t really stopped.

For the next few months I’m going to be writing my book, so I’m going to try and be at home with little Tom in the morning, just hanging out with him.

It’s really precious time, and it’s only been eleven weeks so still getting used to it all. 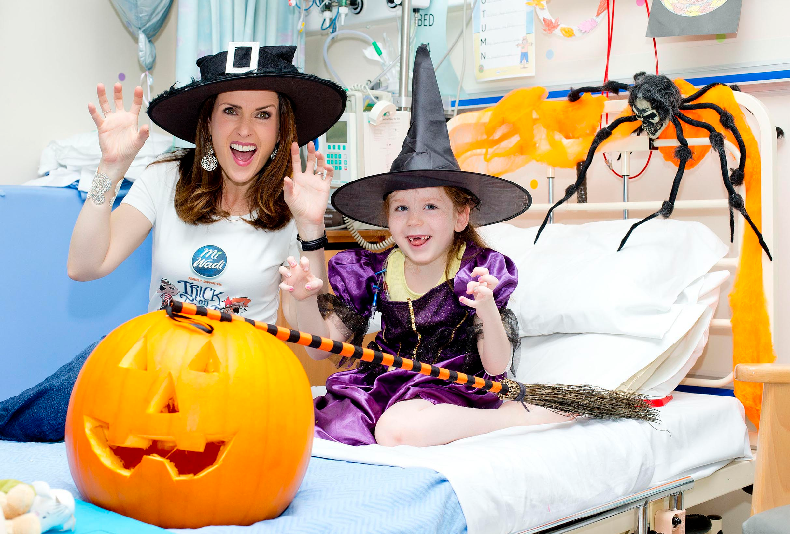 Yeah, well the idea was to have a new series called “The Truth About…” and cover all the topics I wanted to but then I got pregnant so I chose the two I really wanted to do.

END_OF_DOCUMENT_TOKEN_TO_BE_REPLACED

So I hope there may be more if it’s well received. I thought I may as well do the things I’m living at the moment, which is what I tend to do. So I thought while I’m pregnant, why not talk about the fears around pregnancy and childbirth?

It used to be that it only ever came out one way but now there’s home births, there’s water births, there’s netted c-section – so many more options than women realise they have when it comes to having a baby. So I just found it interesting to go around and meet other women and see what way they had their baby.

Then I heard about a birth plan. I had no birth plan, so I was asking what was a birth plan and why do I need it? I think as well we look at the fact that it’s only a plan so it can go completely awol as well. 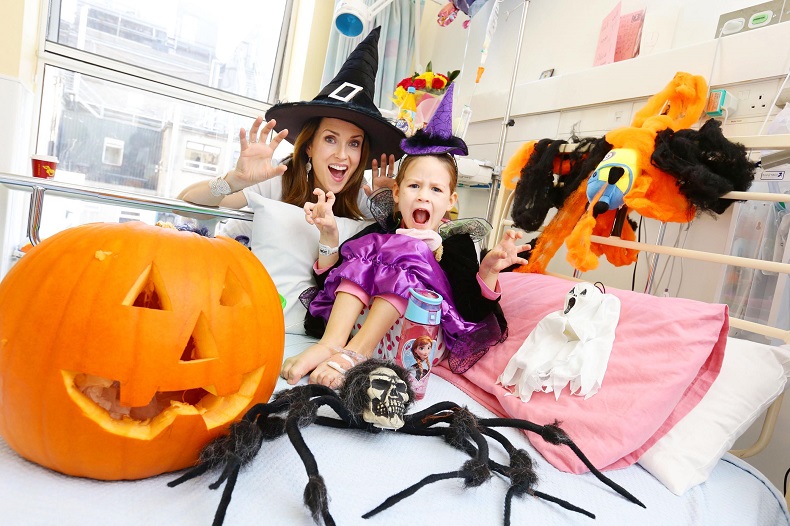 I also reveal how I plan to give birth on the show – something which I only came to a decision on during filming. 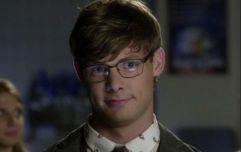 END_OF_DOCUMENT_TOKEN_TO_BE_REPLACED

The second is all about breaking London. The new Irish, which I’m one of now, and how different it is from years ago when it was more a forced exile.

Now, Dublin Airport is more like a bus terminal. It used to be really negative to be Irish in London, but now it’s a really positive thing. The show is a really positive outlook on having a foot in each camp. We’re meeting people who are really making their own way in their industries, like music, fashion design, cooking…

They’re the kind of people that if they were in Dublin they might be really famous, but they’ve chosen to go to London ‘cause they feel it’s a little more anonymous and they feel like there’s more scope.

Then to look at my own life, and to realise I keep going back and forth – when am I going to try break London? What does that mean to me? Should I give it a proper go? It’s all things I kind of need to decide now.

Has there been a struggle between going back to work and being a new mum? How have you managed to balance it?

I think I was a little naïve so far as I thought, I’ll have the baby and I’ll be back to work in a few weeks. I think I understand now why people take 10-12 weeks off – you have to get used to this new little person in your life.

It’s obviously been a hectic few months between filming, plans to write a book and becoming a new mum. What made you want to get involved in this year’s Trick or Treat campaign for Temple Street?

It’s such a lovely campaign, and I was in Temple Street this morning meeting all the kids there’s no denying as a new mum that it’s a different part of your heart. I was asked by MiWadi to come on board for Temple Street, and I was really honoured.

I hope to God I never have to go to that hospital because my son needs to be there. It’s one thing to go visit kids and wish them well, but I really hope they all get out as quick as possible and home to their families.

There’s so much sadness around sick children but something like this is really fun. 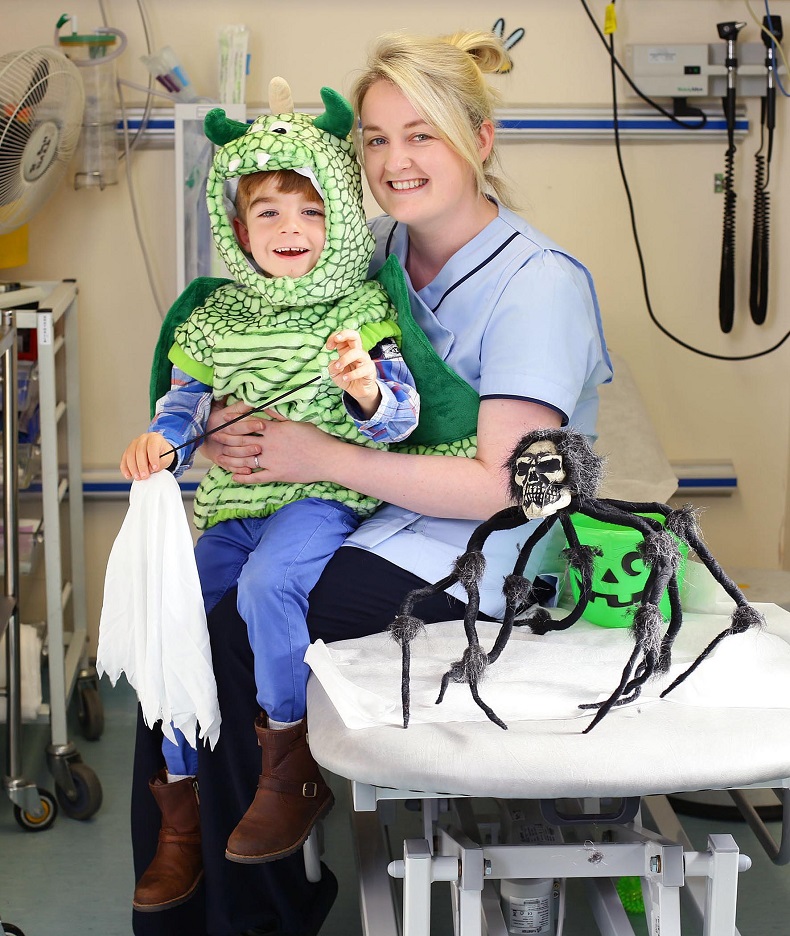 Kids love it, and we want everyone to get involved and host a Halloween party for the Trick or Treat for Temple Street to raise money for the neurology and renal fund.

So we want people in work, people in schools, people at home to get behind us.

I’m going to get some pals, and throw a party. Dress up, do something silly, and make some money for a great cause.

It’s a positive and fun way to get involved and help out.

The doctors and nurses in the hospital do such an amazing job and they put so much love and care into what they do – but there’s only so much they can do with out of date equipment. That’s just something I wasn’t aware of before taking part in this campaign.

So I was delighted to get involved, and honoured that MiWadi asked me.

How do you plan on celebrating Halloween with Johnny and Tom?

Oh we’ll have a party, but I’ll have to tell Johnny first. We’ll do it either here on in London, and we’ll throw it for Temple Street, and hopefully my step-son will be there. We always go trick or treating wherever we are… we kind of love Halloween.

Do you have any plans for what you’ll dress up as yet?

Ah, now that I have baby Tom, we’ll have to incorporate him into it…

So whether I’ll be a giant web and he’ll be the spider, or I got sent a great one online of painting your baby sling like a popcorn bag and putting some popcorn on his head.

Or I could go as a zombie and just not wear make-up. Frankly that’s how I look in the mornings now.

Thank God for make-up, that’s all I can say.

To register your Trick or Treat party today, visit the site here.

Girls With Goals || Her · Ep.151: 'A Story Shared' - Aoife P. Rafter on blogging during a pandemic and living with CF
popular
I'm A Celeb end date confirmed as series wraps up early
Roz Purcell apologises for error with new clothing line amid sizing criticism
The way Diana told William about Charles's affair with Camilla will break you
Here's what happens on every day of your menstrual cycle (roughly)
Irish sustainable clothing company remove all stock from website for Black Friday
Apparently, this is the reason behind Chris Martin and Dakota Johnson's split
Rosanna Davison brings her twin boys home to meet their big sister
You may also like
1 year ago
Turns out, this colour of wine gives you the WORST hangover
4 years ago
Gwen Stefani Receives Massive Backlash After "Insulting" April Fools' Prank
4 years ago
Katie Price Names And Shames The Twitter Trolls Bullying Her Son Harvey
4 years ago
Kim Kardashian Blasts "Body-Shaming and Slut-Shaming" In Brilliantly Honest Post
4 years ago
WATCH: Emma Watson Launched HeForShe Arts Week On International Women’s Day
4 years ago
Kylie Minogue Just Served Kylie Jenner With Some Scathing Home Truths
Next Page