Her son's head is flattened on one side.

The mum opened up about her son's diagnosis after her followers noticed his head was flattened on one side. 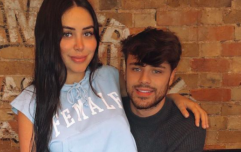 END_OF_DOCUMENT_TOKEN_TO_BE_REPLACED

Marnie explained that due to her son's position in the womb, he developed torticollis.

This means her baby boy cannot move his head to the left.

The former Geordie Shore star is hoping he can fix this with physio appointments, but there is a long way to go.

She told her followers, "This condition has left him with plagiocephaly. The head is flattened on one side, causing it to look asymmetrical.

"This can cause the ears to be misaligned and the head looks like a parallelogram when seen from above.

"Sometimes the forehead and face may bulge a little on the flat side."

Marnie explained that she wants to be open about this process because so many parents are afraid to talk about it. 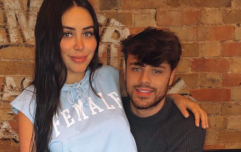 Marnie Simpson and Casey Johnson have welcomed their first child together

END_OF_DOCUMENT_TOKEN_TO_BE_REPLACED

She wants any mum or parent going through the same to feel less alone as they get through this difficult time.

The mum said she was shocked when she noticed the "severe side" of her son's head, but he will be fitted for a helmet which will hopefully help Oax.

"I’m being open about his process as I know so many parents don’t even know about this issue.

"He’s had his measurements taken yesterday and in 2 weeks he’ll get his helmet fitted this," she shared.

Marnie said her son will make progress with treatment. Treatment usually starts when your baby is 4-6 months old because their skull is still soft then.

popular
Bride asks for divorce day after wedding following groom's disrespectful cake stunt
Head of dive squad searching for Nicola Bulley thinks 'something's not right'
Teenager killed in shark attack after swimming with dolphins in Australia
These are the most popular names for babies born in February
Police believe they know what happened to missing dog walker Nicola Bulley
'He's a changed man': Woman marries her 'high school bully'
Here's why Nicola Peltz-Beckham's family are suing her wedding planners
You may also like
3 years ago
'The most magical moment': Marnie Simpson just revealed the gender of her baby
3 years ago
Marnie Simpson promotes diet pills hours before pregnancy news and fans aren't happy
3 years ago
Geordie Shore's Marnie Simpson is expecting her first child with Union J star Casey Johnson
5 years ago
Geordie Shore's Marnie takes aim at the show in now-deleted tweet
5 years ago
Niall Horan has been linked to one of the Geordie Shore girls
6 years ago
People are not impressed with Marnie Simpson's dress at the NTAs
Next Page