Maya Jama and rapper Stormzy were together for four years before they called it quits this summer.

Of course, being in the limelight is never easy when you're going through personal problems. Maya has opened up about what it has been like going from being unknown to being a celebrity - and how difficult it is. 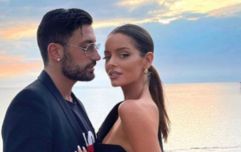 Wait... Are Maura Higgins and Giovanni Pernice back together?

END_OF_DOCUMENT_TOKEN_TO_BE_REPLACED

Speaking to the Evening Standard, the presenter said: "I used to read magazines when I was little and see all these Hollywood people break up and they didn't feel like real people."

The Sun reported last month that Jama initiated the split because she wants to focus on her career.

"Maya has moved out of their home in South West London," a source told the publication.

"The decision isn’t one she has come to lightly, but ultimately the relationship has come to an end. She wants to focus on her TV and radio career for now."

However, now that she is living on her own, she's enjoying being by herself.

"I've got this little flat that reminds me of a Sex And The City apartment. But without the sex.

"I feel like the world's my oyster," she said.

popular
Late Late Show viewers are not happy with Ryan's questions for Billy Connolly
10 items from Zara for the perfect autumn capsule wardrobe
Friends actor James Michael Tyler has died, aged 59
Apparantly, there is one colour you should never wear at a job interview
Friends Star James Michael Tyler Files For Divorce
The First Quadrillionaire? Paypal Accidentally Gives Man $92 Quadrillion
15 brilliant stocking fillers we are picking up from Penneys before they sell out
You may also like
3 months ago
Love Island viewers furious with Aaron after last night's breakup
2 years ago
It's official: this is the worst way to break up with someone
2 years ago
Jade Thirlwall has reportedly split from her boyfriend of three years
2 years ago
Love Island’s Kaz Crossley and Josh Denzel have officially broken up
2 years ago
'I'm always doing silly things': Dani Dyer apologises to Jack over rash breakup decision
2 years ago
Dani and Jack are still hosting this awards ceremony together despite their break up
Next Page