From all of the Kardashian sprogs to Louis Tomlinson's very own Sydney Rain, famous babies everywhere are rarely called Matthew, Mark, or Mary.

Many famous people go to extreme lengths to guarantee their children have a unique name, and another celebrity that's gone and had absolute notions about herself is Megan Fox. *sigh* 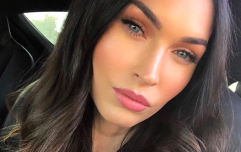 END_OF_DOCUMENT_TOKEN_TO_BE_REPLACED

The news of the pregnancy came as a surprise to everyone as Megan filed for divorce from her husband, Brian Austin Green, in 2015, but after the announcement of the pregnancy, it was said the pair kissed and made up.

People took to Twitter to poke fun at the unusual name

It's not yet known if the couple named the child after the 70s American rock band, but we can only hope.

popular
Eoghan McDermott is set to be replaced by another Irish comedian on Love Island Australia
Fashion detox: All you need for the perfect wardrobe is 37 items of clothing
Andrew McGinley praised for strength after cruel Twitter comment
Katie Price's family release statement after her reported arrest for drink-driving
Brian Laundrie's family issue statement as search due to be scaled back
Hollyoak's Stephanie Davis has experienced a miscarriage
R. Kelly is finally found guilty - but why did it take so long?
You may also like
4 years ago
Megan Fox shared the first picture of her baby
5 years ago
Megan Fox's Divorce Reportedly "On Hold" Following Pregnancy Rumours
5 years ago
PIC: Megan Fox Confirms Pregnancy With Image Of Who ISN'T The Father
5 years ago
Megan Fox Reportedly Pregnant With Her Third Child
5 years ago
Megan Fox Shares Gorgeous Snap of Son Bodhi
6 years ago
Some Very Exciting Changes For Megan Fox In The Works
Next Page