Megan Fox recently shared a photo of her two young sons on Instagram and she's now receiving backlash for the most ridiculous reason.

Noah (5) and Bodhi (4), were ready to go surfing and so, their proud mum decided to take a quick snap of them, describing them as "her world".

However, Megan, who is also mum to Journey (1), probably wasn't prepared for the backlash that followed with numerous people criticising her for allowing their hair to grow so long.

"Meghan why your boys looks like they r girls? [sic]" 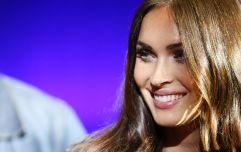 END_OF_DOCUMENT_TOKEN_TO_BE_REPLACED

Another asked why Meghan hasn't cut their hair, yes really.

That's not all either for some followers were completely confused and asked if the boys were her daughters or nieces.

Thankfully, some of Megan's fans were quick to jump in and say that she's perfectly entitled to leave her children's hair long if she so wishes.

"I let my sons hair grow out when he was small also. I love it!!"

"People posting nasty comments about someone’s children well shame on them, I wish all the nasty trolls would just go away".

Also, fair play to this individual:

"When did hair become a female thing?? So if a woman doesn't have hair, she's a boy? People are ridiculous. They look cute. Love it! Why are people even insulting children to begin with?! Smh bet they'd be quick to yell at another kid for bullying though, when they are bigger bullies!"

You can check the adorable photo and post here.

popular
Late Late Show viewers are not happy with Ryan's questions for Billy Connolly
23 shows with four or more seasons to watch on Netflix
Someone has ranked the penis size of men from all over the world
The First Quadrillionaire? Paypal Accidentally Gives Man $92 Quadrillion
Former detective chief says Brian Laundrie discovery is "strange"
Max from Hocus Pocus looks very different now and we can't cope at all
Here's what happens on every day of your menstrual cycle (roughly)
You may also like
4 years ago
Megan Fox shared the first picture of her baby
5 years ago
Megan Fox's Divorce Reportedly "On Hold" Following Pregnancy Rumours
5 years ago
PIC: Megan Fox Confirms Pregnancy With Image Of Who ISN'T The Father
5 years ago
Megan Fox Reportedly Pregnant With Her Third Child
6 years ago
Megan Fox Shares Gorgeous Snap of Son Bodhi
6 years ago
Some Very Exciting Changes For Megan Fox In The Works
Next Page