This is lovely for them.

It has been confirmed that Meghan Markle and Prince Harry will be spending Christmas in the United States.

A Buckingham Palace spokesperson said: "The Duke and Duchess of Sussex are looking forward to extended family time towards the end of this month."

"Having spent the last two Christmases at Sandringham, Their Royal Highnesses will spend the holiday this year, as a new family, with the Duchess’ mother Doria Ragland."

"For security reasons, we will not be providing further details on their schedule at this time."

‪This evening The Duke and Duchess of Sussex accompanied Her Majesty The Queen and members of @TheRoyalFamily to the annual @RoyalBritishLegion Festival of Remembrance. This special event, which has taken place every year since 1923 at the @RoyalAlbertHall, commemorates all those who have lost their lives in conflicts.‬ • ‪This year’s Festival marked the 75th anniversary of a number of crucial battles of 1944, with a particular emphasis on the collaboration and friendship of the British, Commonwealth and Allied armies who fought them. A unique tribute was given to acknowledge those involved both past and present, culminating in a special parade of some of the last surviving veterans who fought and served in 1944.‬ • ‪Their Royal Highnesses, who last year attended their first Festival of Remembrance together, were honoured to once again pay tribute to all casualties of war and remember those that have made the ultimate sacrifice for their country.‬ ‪#FestivalOfRemembrance ‪#WeWillRememberThem‬ Photo © PA / Royal British Legion 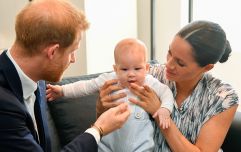 Prince Harry's update on his son Archie had us absolutely melting

END_OF_DOCUMENT_TOKEN_TO_BE_REPLACED

This trip to the United States will come as part of a six-week break from royal duties, that will allow the Sussex family some quality family time.

They decided to take some time off after appearing in an ITV documentary while on tour in Africa.

This will, of course, be their first Christmas as a family-of-three following the birth of Archie in May.

So lovely for them.

As for Prince William and Kate, they are expected at Sandringham with their three children and other members of the royal family.


popular
The flattering €16 Penneys dress we'll be wearing every day for the foreseeable future
We finally know the identity of baby Archie Harrison's godparents
Kate Middleton is wearing an amazing red glittery gown tonight and she looks like a princess
Brad Pitt JUST responded to speculation about his relationship with Jennifer Aniston
These blue mom jeans from Penneys are actually unreal, and they're only €17
People discuss what they fought about with their siblings and we're actually howling
The €30 New Look skirt we're going to be living in for the next few weeks
You may also like
14 hours ago
We finally know the identity of baby Archie Harrison's godparents
1 day ago
'A happy and peaceful new life' - What happens next for Prince Harry and Meghan Markle?
2 days ago
Meghan and Prince Harry issue statement after agreement to leave the royal family is confirmed
2 days ago
Meghan Markle and Prince Harry to no longer use HRH titles as details of deal to split from royal family revealed
2 days ago
Meghan Markle and Prince Harry's Frogmore Cottage staff are being 'redeployed'
3 days ago
Samantha Markle has spoken out about Meghan and Harry's decision to pull away from the royals
Next Page