Michael Griffiths is taking part in the new season of Ex On The Beach, months after causing a lot of drama on Love Island.

However, the former fire fighter says that he won't come across badly in the new show like he did during the summer.

"So people tend to think I'm an arsehole, and I'm not. You'll see a completely different side to me and I won't come across as some kind of villain," he told The Mirror.

Triple black for the itv palooza thanks to @claudio_lugli ? @itv #itvpalooza 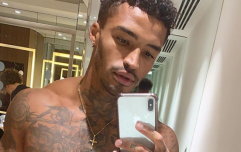 END_OF_DOCUMENT_TOKEN_TO_BE_REPLACED

"In Ex On The Beach I'm a lot more open that I was on Love Island about how I'm feeling, and that's hard for me because I've been a closed guy since I was a teenager.

"So for me to open up and tell someone how I feel and when something's not right and explain why it's not right, that's a lot for me."

Micheal also revealed that he has signed up to The Dreamboys, and he's "absolutely buzzing" to begin. The Dreamboys is a male revue that tour doing theatre shows and nightclub residencies.

popular
Curtain bangs are trending - here's everything you need to know
'Beard-baiting' is now apparently a dating trend - and we're all for it
15 tattoo ideas you'll adore if you love the sea
"Like botox, but without needles" – I tested Gua Sha, and the results were impressive
Someone has ranked the penis size of men from all over the world
Will there be a second season of Gilmore Girls: A Year In The Life? Here's what we know
QUIZ: Can you name all 32 counties in Ireland in under 4 minutes?
You may also like
1 year ago
Things kick off tonight as Michael calls Amber disrespectful after an intense screaming match
1 year ago
Love Island's Georgia Steel is interested in dating THIS contestant once he leaves the villa
1 month ago
Matt Damon is returning to Ireland, and he needs extras for his new film
1 month ago
Everybody loves Jedward now
1 month ago
Tributes pour in for RuPaul's Drag Race star Chi Chi DeVayne, who has died, aged 34
1 month ago
Britney Spears asks court to end father's control over her life
Next Page