Mega congratulations to Miranda Kerr and husband Evan Spiegel - the lovebirds have now said 'I do' in front of just 50 guests.

The pair first met at a Louis Vuitton dinner in New York, have been dating for close-to two years, and announced their engagement last summer.

Miranda, 34, and Evan, 26, were married yesterday at their stunning home in the upmarket area of Brentwood near San Francisco with the 20-minute long ceremony kicking off at 4.40pm.

"It was a small intimate wedding," a source tells E! News. They add that the supermodel bride looked regal and like a "natural princess".

Both Ms Kerr and Mr Spiegel had tears in their eyes and the vows "were beautiful," the source furthermore explains. 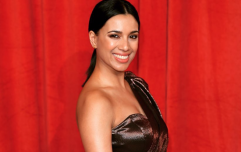 END_OF_DOCUMENT_TOKEN_TO_BE_REPLACED

TMZ reports that the ceremony was very hush-hush, with guests being told to congregate at a secret location before being shuttled up to the Kerr-Spiegel home for a cocktail reception in advance of the ceremony.

The site also says that during the reception, Miranda performed "a somewhat shaky" karaoke version of Shania Twain's You're Still The One.

At least MUA-to-the-stars Lisa Storey - who regularly works with Ms Kerr - was on hand for expert touch-ups throughout the evening.

Evan is the founder and CEO of Snapchat and has a net worth of billions.

Miranda was previously married to actor Orlando Bloom. They have a child - Flynn - who is now five, but the high-profile couple split in 2013 after three years of marriage.

Since pairing off with Mr Spiegel, the Victoria's Secret star has admitted that she's at  least considering having more kids.

"I am very content with having just one, but I am definitely open to the possibility of having more," Miranda has said.

She added that Flynn will also often ask: "My friends have brothers or sisters, will I have a brother or sister one day?"


popular
David Beckham shared his dinner on social media and we really wish he hadn't
Dad hides coronavirus symptoms from hospital staff in order to see newborn
How to make your own seaweed face mask for a clearer complexion
RTÉ share details of new classic movie schedule - and it all kicks off tomorrow
#Covid-19: Next week will see decision on whether lockdown will continue past April 12
Someone has ranked the penis size of men from all over the world
The lineup for tonight's Late Late Show has been revealed
You may also like
2 weeks ago
Converse has a wedding range and it is seriously gorgeous
2 weeks ago
Meath MUA offering free bridal package to bride-to-be amid coronavirus cancellations
2 weeks ago
'A fancy wedding is a privilege' YouTuber Melanie Murphy weds in intimate ceremony
2 weeks ago
Charlotte Tilbury launches a range of wedding lipsticks and ladies, they are so GOOD
3 weeks ago
These beautiful bridal shoes 'sell out every single time' and we can totally see why
3 weeks ago
Brides, meet the ASOS dress you will either love or hate (there's no in-between here)
Next Page