Such an unusual name.

Yesterday model and actor Emily Ratajkowski announced that she has given birth to her first child.

Ratajkowski announced in October last year that she was expecting her first child with film producer Sebastian Bear-McClard.

Ratajkowski posted a beautiful photo of her breastfeeding her newborn to social media to reveal to fans that she had given birth.

The 29-year-old posted the sweet photo as well as revealing her child's name, which is one we haven't heard in a while;

"Sylvester Apollo Bear has joined us earth side.

Sly arrived 3/8/21 on the most surreal, beautiful, and love-filled morning of my life."

Apart from Sylvester Stallone, it's not a name that you hear of that often and a really unusual and unique choice.

Since posting the good news yesterday, friends and fans alike have been quick to leave messages of congratulations to the new parents.

Among those leaving messages were fellow models Helena Christensen and Kate Bosworth;

"Congratulations Emily! We are so happy for you and little Sylvester!!"

"Congratulations on the baby pisces angel!!" 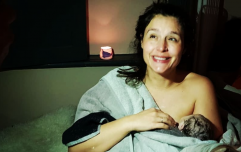 END_OF_DOCUMENT_TOKEN_TO_BE_REPLACED

Ratajkowski married her husband Sebastian Bear-McClard in a ceremony at New York City Hall in 2018.

The Gone Girl actor has stated in previous interviews that she plans on raising her child gender neutral.

Ratajkowski has not posted anything else since she announced the arrival of little baby Sylvester and our guess would be that she taking time to bond with her new baby and grab some sleep when she can.

We're absolutely delighted for Ratajkowski and her husband and we can't wait to see more photos of gorgeous baby Sylvester.

popular
Dublin nurse scammed out of all her savings warns others
Derry Girls star speaks out after show called "distinctively British"
Maura Higgins reveals NTA ordeal after man tried pulling her into a car
The 'secret' Zara label signs that'll apparently help you get the right size every time
Waterford man jailed for six months for sexual abuse of niece
Two people die in separate road collisions in Meath and Donegal
5 Gogglebox stars quit show after deaths of loved ones
You may also like
2 months ago
Woman who gave birth to 10 babies speaks out following fraud claims by partner
3 months ago
Record breaking: Woman gives birth to 10 babies after four were missed in scans
4 months ago
Maternity care restrictions harming mental health of expectant mothers
4 months ago
Woman gives birth to nine babies
4 months ago
Woman had "no idea" she was pregnant, gives birth on flight and goes viral on TikTok
4 months ago
Woman handcuffed to bed by police while in labour
Next Page