Mrs Brown's Boys actress Fiona O'Carroll has revealed that she has split from her husband and co-star Martin Delany, who you may know better as Trevor Brown.

The couple met when they were only 16 and ended up getting married back in 2006 in an intimate family ceremony, including dad Brendan O'Carroll. 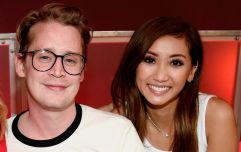 END_OF_DOCUMENT_TOKEN_TO_BE_REPLACED

Fiona has now revealed that she and Martin have decided to go their separate ways, explaining that the two just weren't in the same place anymore.

Also making sure everyone knew that the break-up didn't involve anyone else, Fiona said that their split was quite amicable.

Opening up about her separation from Martin, Fiona told the RTÉ Guide: "Myself and Martin met very young. I was 16, and I suppose he’s all I’ve ever known and we just kind of grew apart.

"We wanted different things. I still have a lot of love for him and I only want the best for him and I think he feels the same way about me.

"There were no major fights, and nobody else was involved but it was a case of not being on the same page any longer."

Fiona, who plays Maria Brown in the family show, also said that she tried to keep the relationship up and hold onto it after seeing her mum and dad split up in 1999.

Wanting to be a role model for her children, she clung to the relationship for "as long as I could" and didn't want her kids to feel how she had.

Eventually, she knew it was time to end things despite trying to make it work, and revealed she didn't tell her children Felix (14), Eli (12), Isaac (7) and Dexter (6) that they had separated for almost a year.

While Martin has since moved to Portugal, when he comes home to Ireland he stays in their Ashbourne home with his sons as the ex-couple have developed a co-parenting routine.

popular
Women are rinsing their hair in apple cider vinegar – and the results are amazing
"Hair contouring" is about to be huge, here's everything you need to know
The Puppet Master: Where is Robert Hendy-Freegard now?
New photo of Bernadette Connolly released as investigation continues
Here is how your trendy bath bombs are actually really bad news for your vagina
Damian Lewis pays touching tribute to late wife Helen McCrory with Irish poem
Love is in the air: 3 new fragrances we love – just in time for Valentine's Day
You may also like
2 months ago
Brendan O'Carroll mourns tragic loss of Mrs Brown's Boys crew member
7 months ago
Mrs Brown's Boys chat show cancelled this year due to Covid
1 year ago
Mrs Brown's Boys to continue until at least 2026, Brendan O'Carroll confirms
1 year ago
Two new Mrs. Brown’s Boys Christmas specials are coming this Christmas
2 years ago
Mark the calendars: Mrs Brown's Boys is coming to Cork, lads
2 years ago
Mrs Brown's Boys has topped Irish Christmas TV ratings for the ninth year in a row
Next Page